"What is life but a series of inspired follies..." G.B. Shaw

Without the "distraction" of My Fair Lady's fantastic score and memorable songs, Pygmalion speaks volumes about a culture in transition. As my first Shaw (only a century or so late to the party), I found the San Diego Old Globe's production of Pygmalion was a fantastic introduction to Shaw's work. Charlotte Parry's Eliza Dolittle is heartbreaking and when she finds her voice and begins to use it, the richness of Shaw's play becomes apparent. 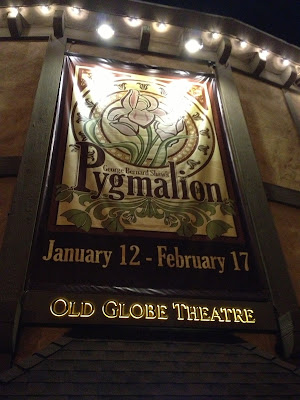 Lightly foreshadowing the rise of Bright Young Things, and a generation that would have looked nothing like it's parents, Shaw presents an upper class girl desperate to be part of the in crowd of her generation even if that means dropping the trappings of formality from her mother's generation and a lower class girl trying just as desperately to separate herself from her father's wicked ways and climb out of the world she was born into. Suddenly each class wants what the other has--a loosening of the rules for one, a tightening of respectability for the other. The walls between them begin to weaken because may those things start to become possible.


Eliza Dolittle (Charlotte Parry) sells flowers on the streets.  In a chance encounter with famous linguist Henry Higgins (Robert Sean Leonard) he bets his friend Colonel Pickering (Paxton Whitehead) that in six months time he can pass her off as a society lady.  Dolittle shows up at Higgins's home and takes him up on his glib offer.  Something in his offer has sparked something inside her.  She may be poor but she's not stupid and grabs this opportunity.  Over time she becomes the model student but even as Higgins's language instruction opens up a new world to Dolittle there is something darker lurking.  Contrasted against Eliza and her father Alfie (Don Sparks), a drunkard who lives in sin and tries to shake down Higgins for money, are the posh Eynsford Hill family.  Silly, traditional and a bit dim Mrs. Aynsford Hill (Maggie Carney), daughter Clara (Danielle O'Farrell) and son Freddie (Robbie Simpson) make appearances at the home of Henry's mother (Kandis Chappell) while Eliza is learning to fit in.  They represent the world she is desperate to blend into.  But Clara and Freddie take a shine to Eliza because of the way she speaks and her unexpected frankness--all the things she is trying to shed.

What could just be a fish out of water comedy, ends up being a more serious affair beneath the surface.  Shaw gets to explore some meaty themes.  His characters make for entertaining vessels to deliver the message.  Henry Higgins clings to his belief that treating everyone poorly but the same is the answer. This equality can be unfeeling and hurtful. Of course he's a wealthy man who can get away with this experiment in equanimity as he goes home to his warm house with running hot water and someone to find his slippers for him. It's a privileged perch to argue he's the voice of equality.  He's also a man.  His philosophy is called into question throughout the play but I liked that in the production (and in the play) he is trapped in his way of thinking and it pains him to maintain his views in the face of overwhelming opposition.

Contrasting the wealth and society position of Higgins is Eliza's father, Alfie, a common dustman.  Higgins, without much thought, makes a joke of Alfie and this joke backfires and thrusts Alfie into society himself.  Alfie suggests one gives up freedom and happiness when one has money. His life becomes poorer when he gains money but once he has money he cannot resist it and walk away from it even if it means a less fulfilling life.

Eliza has always been essentially respectable, hard working and moral at her core ("I'm a good girl I am" is her refrain) but no one could recognize that beneath her dirty clothes and her guttural uttering. Becoming a society lady involves shedding the surface dirt but she does not realize that should she commit to life in society she will no longer be independent and free. In society, her only choice is to marry as she is now too respectable for employment.  By learning to talk and act properly, she can no longer earn an income and maintain her society standing.  Of course the only people who recognize Eliza's impending doom are women--Mrs. Higgins and Higgins's housekeeper. The two clueless "confirmed" bachelors, Higgins and Pickering, never recognize that the only women in their circles are wives, wives to be and widows.

What Eliza thought was an opportunity comes at a cost she never expected.  Eliza articulates the difficult reality of her day--as a flower girl she never had to sell herself but now that she is a lady she has no other choice.  Parry's performance and painful declaration "What will become of me" brought tears to my eyes.  Removing the romantic overlay that My Fair Lady added later, the dangers of Eliza's situation become much more clear and the desperation of her situation is far from comic.  Certainly there is a lot of Shaw moralizing about the issues he has with society but Eliza, as performed by Parry here, is a fully-fleshed out character.  I found the moralizing well-balanced against smart writing and strong performances so I did not mind it so much--and probably most of the audience was just focused on the comedy.

Paxton Whitehead was perfectly cast as Colonel Pickering--stiff upper lip, warmth toward Eliza, and enough bumbling. I struggled with Robert Sean Leonard again as I did in his Broadway turn in Born Yesterday. There's a stiffness and falseness about him that gets in the way of connecting to the emotional aspects of his character.  It's not a fatal flaw but a niggling complaint at the back of my mind because 20 years ago I saw him in Long Day's Journey Into Night and he shattered me with that performance.  I guess I'm always chasing that particular rainbow.  But I will say his accent was not very good and in a show all about accents it was particularly frustrating.

The supporting cast was a mixed bag. I enjoyed Kandis Chappell's haughty but deeply knowing performance as Mrs Higgins. Maggie Carney did a fine job as the spacey socialite Mrs Eynsford Hill. The cast was filled out with graduate student performers.

A lush set, by Alexander Dodge, indicated the time and place well. The direction by Nicholas Martin was unobtrusive and I found the staging of the final scene served Shaw's intent well.  As much as the audience found the comedy rollicking, I thought this production highlighted the deeper meaning of the work well.