Signature Theatre hosted a short pre-show talk with Annie Baker and Sam Gold to discuss their artistic collaboration.  This coincides with the fifth show they are working on together, John, currently in previews at Signature. 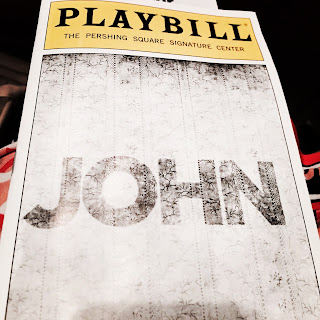 Baker and Gold laughed at how they cannot recall the exact facts surrounding their original meeting and how it has gotten fuzzier as it has become more of a story they tell.  But as best as they could recall they traced it back to the suggestion of mutual friends at Youngblood who thought they’d get along. This resulted in a coffee meeting.

Their collaboration took hold when they were looking to do a project together at the Sundance Institute.  Baker had 45 pages of a play she was going to scrap and Sam asked to read them.  Those pages eventually became the play Circle Mirror Transformation.  Unlike more recent work where Baker worked on her own and handed Gold something more like a complete first draft (or a mostly complete one), with CMT this piece grew from their collaboration with each other and the actors. They would spend a great deal of time (though neither of them could remember exactly how long or what year this all took place) developing the work together in workshops and readings.

Baker talked about her tendency, at least with the last two plays (The Flick and John), to write with specific actors in mind.  For John, her intent was to “write[] a play for Georgia Engel.” But also, Baker wanted John to not follow the same set of rules as some of her other plays.

They both suggested that John is a bit of a departure from some of their previous work.  Gold explained that for many years (and central to their original collaboration) they were reacting against a certain kind of theater happening in New York and they wanted to intentionally avoid that flow and look.  After The Flick, Gold said they got over the things they were annoyed with a bit.

Whereas they had previously spent time creating a banal, neutral environment and let the actors fill it with warmth (an environment Gold described as “dry”), for John, they have flipped that.  The space is the least banal and least neutral they have created.  Gold joked the environment in John is very “wet.”  They are also working with new designers in their collaboration to help create this new feel.

Gold described their preview process for John as “We are obsessing over minutiae and enacting it all day long.”  Baker is not re-writing in previews, but they are “calibrating performances on a minute level,” said Gold.

When the event was turned over to audience questions, sadly the first was the most predictable.*  A man asked why Baker’s plays were so long.  He feigned ignorance over this being a long-standing controversy.  Baker, with justified irritation, addressed his question noting in the first instance that her work is not as long as say Tom Stoppard’s but no one seemed to question him about that.  She explained that she does not set out to write long plays.  The plays tend to tell her when they are done. But she has taken a novelistic approach to her work at times  She predicted her next play will be shorter.

When asked if they disagree with each other, Gold responded quickly, “We say no to each other all of the time.”  It is a key part of their collaborative process.  Aspects of the shows that end up on stage are the result of someone fighting for their belief that it is needed even when someone else said no. Though Gold wondered aloud what Baker's work would be like if she worked with someone "nicer" than him.

When asked about how Gold approaches the silence in Baker’s plays, he explained that he directs the silence the same as he directs dialogue.  But he noted that the silence gives the audience the opportunity to appreciate the formal aspects of the play because they are “not being distracted by the part of their brain that processes language.”

The last question of the discussion was about why Baker chose to adapt Uncle Vanya.  Baker proceeded to tell a story about when they were living in Utah together with a bunch of other people they got drunk and read Uncle Vanya,  Gold played Uncle Vanya (Baker said he was very good).  And she played Sonya.

So now you know what the cool kids do on their theater retreats.

John has been extended through September 6th at The Pershing Square Signature Center.

*There was another question which I can only summarize as "Why did you do [spoiler]?"  To which Gold suggested they not discuss it because many in the lobby had not seen the show yet.  Then a hostile woman in the front asked that the question be repeated.  The moderator explained that the question was spoiler-y so they did not want to repeat it.  And the hostile woman complained that they said they were going to repeat questions so at least they could repeat that question even if they were not going to answer it.  And this is why talkbacks are the literal worst.
Posted by Nicole S at 3:19 PM No comments: Links to this post