Ross Sutherland and His Adventures in Videotape 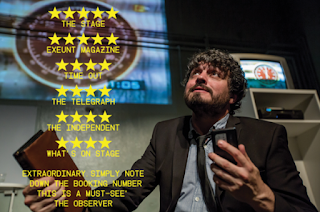 Scottish poet, storyteller, and artist Ross Sutherland arrives in New York this week with a show called Stand By for Tape Back-Up.  It's a meditation on grief, nostalgia, and the odd bits of life we pick up along the way.  Sutherland performs the show live with a looping VHS tape of clips from movies, television, and advertisements as the back-drop. It's an indescribable delight (though I tried to describe it here). The show was one of my top 10 shows in the UK in 2013. I walked in knowing nothing about Sutherland's work...and walked out a fan.

New York audiences will have a chance to see Stand By for Tape Back-Up October 9th and 10th at Union Docs in Brooklyn. Tickets are $15.

Sutherland generously agreed to answer some cheeky questions about the show and it's very 80's content.


What's a VHS tape? Is that like Netflix? Is it a British thing? How do you use the VHS tape in this show?

Let me explain! Once upon a time, TV was a fast-moving river that churned all day, every day. Even when you turned it off and went to bed, it still kept going. You couldn't pause it or save any of it or anything. Then one day, someone came up with the concept of watching something ‘more than once’. We take it for granted now, but the concept of ‘more than once’ was revolutionary at the time. So VHS was born! A VHS tape was like a little bowl you could dip into the river and use to save a tiny bit of water. Then you could drink that little bit of water whenever you wanted! But the bowl wasn't very accurate. And the water got stinky really fast. And sometimes the water got stuck inside the bowl and ruined it. Also: tracking. I tried really hard on this analogy and now I wish I hadn’t.

Stand By For Tape Back-Up is about a single videotape that I made with my granddad when I was a kid. The tape was a collection of our favorite TV shows and films. After my granddad died I lost the tape but then recently I found it again. So, in the live show, I lead the audience through the contents of the tape, re-purposing scenes from films and using them to tell a personal story from my life.

God I don't know. I write a lot of poetry but it’s always a weird thing to define yourself by. I can't meet someone in the street and say, “I’m a poet”. That just sounds like a flamboyant way of telling someone I’m unemployed.

Poetry forms the basis of all the work I do though. Whether I’m making a film or a theatre show or a board game, etc, I always approach it the same way as a poem. Lots of the poetry I write is a bit like word-puzzles. I set myself all these horrible rules, and then I have to try to write around them. The harder I make it to write, the more I bypass all the cliched cheesy stuff in my head. I like live performance because poetry feels like a living thing to me. When you read it on the page it can sometimes feel opaque and closed-off, but live you can hear its flaws and its frailty.

When I rediscovered the videotape, one of the first discoveries I made was finding an episode of TFPOBA on it. The weird thing is, I know I didn't put it there. So I’m assuming that it must have been my granddad who added that to the tape. I’m comforted by the thought that my granddad might have been a fan of the Fresh Prince. It brings me closer to him to imagine him watching it. Since then, I’ve watched the Fresh Prince a lot more. I dunno. These things become weird conduits.


The show is highly dependent on synchronicity of words and images. Has it ever gone terribly wrong?

I have to stay exactly in-time with the videotape or the entire performance stops making sense. My performance is written to match the video shot-for-shot, so I can’t even drop a second. I’m pretty good at it by now and can cover most of my fuck-ups.

I had one incident during the London run earlier this year when we had a technical fault ten minutes from the end. The video stopped working entirely. It was just a power issue but for a second, everyone in the room thought that the videotape had snarled up and destroyed itself.

We all shared this panicked moment. I felt like a man who had spent the last hour parading around with a precious, priceless vase and then slipped and thrown it at a wall.


Name 5 scenes from movies that sum up the show.

This is tricky! Rather than choose scenes appears on the tape itself, I’ve tried to pick scenes from films or TV shows that deal with the same sort of themes.
Groundhog's Day

Is this your first appearance in NYC? What are you most looking forward to?

I’ve never been to New York before. I’m really excited. I’m expecting some sort of cross between Annie Hall and The Taking of Pelham One Two Three. Please don't tell me that films have lied to me.