Sometimes a show is a time capsule to another part of your life. I saw Tony Kushner’s Angels in America on Broadway just after I moved to New York. I was 17.

For a sheltered suburban teenager, I knew about AIDS from the news and reading movie magazines which contained yearly tallies of the disease’s decimation of the arts community. I visited my mother in the hospital in 1988 and remember the rooms where nurses would cover themselves completely before entering.  Despite no personal connection to the epidemic, I asked everyone in my graduating class to wear a red ribbon for our graduation day—a strangely small, public act of defiance in a relatively conservative high school.

When I saw Angels where gay men have sex, are affectionate with one another, or demand their recognition on stage, it was a big deal (for context, Chicago was considered too risqué for my high school to put on).  To my eyes it was radical and rebellious in ways I had not been aware of before. With its form breaking, openly political agenda, and sweeping scope, it also became a landmark piece of theater at an impressionable age.  I never stage-door shows, but I stage-doored to get Tony Kushner’s autograph which remains the one playbill autograph I have. 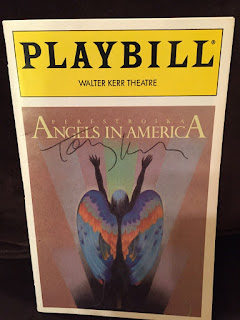 Revisiting Angels in London 24 years later is a mindfuck. What has gone on in the points between the first time I heard the words “More life,” and this week—it is a lifetime of changes for me and for the world.  But there is so much that that wide-eyed 17-year old did not know was coming.  In the play and in life.

I am grateful for the chance to see the play again, done in a manner it deserves (side-eye to that awful Off-Broadway production I will not speak of again).  Having a second chance in life to fall in love with these characters as they struggle, hurt, and break my heart, feels like a tremendous gift.

Weaving together a narrative of Reaganite politics, Mormon religion, gay rights, race, love, disease, history, and survival, the play speaks to America in all it’s disappointing failures and yet the American addiction to hope in the face of those failures.  Yet my seven plus hours at the National Theatre also created a certain sense of dislocation as this ultra-American story unfolded in a London theatre.  Laughter at its American-ness with distance was a luxury this American could not afford.  As we live under the regime of a “Roy boy” in the White House, my understanding of the American experiment and our historical failures has never been so raw and close to the surface before.

The play may focus on a particular time in American culture, conversation, and politics and some might find the story being told as reflecting a past that is no longer familiar.  It may be easy to forget this recent history.  But when I saw the play in 1993 the word “gay” was still a common pejorative on school playgrounds.  There was still a fear around AIDS.  The play’s radicalness may have dulled in the passage of time.  But it’s messages remain relevant.

In some ways, this journey to London was a homecoming.  A reunion with my past self, a reckoning with the present, and a communion with a still broken America.

Even with distance, line readings from the Broadway cast still ring in my head. But as the familiar met the unfamiliar in London I found my mind at peace with the performance changes. In these new hands, the work is less funny and strangely more real. For a show with many surreal moments the timbre of these performances is grounded. While the performances bring new richness, the production is a frustrating battleground of dissonant choices and visual frippery.

Ivo van Hove's edited production of Angels showed that the play can be stripped down and still deliver emotional satisfaction. Marianne Elliott opts to punctuate the production with bold brushes of lighting, punches of music and sound, a patchwork of neon, linoleum, turntables, and frames in the scenic design by Ian MacNeil.

However, the visuals of the production fail to color our experience of the play—bringing no additional storytelling or emotional guidance.  Of course, with the cracking of the characters (and the world) the theatre space breaks apart.  The claustrophobia of the characters may evolve and grow into the broader, freer space.  But the materials used which may be riffing on the 1980's, are too literal. The layering of these dull surfaces and neon frames provide little meaning.

As the characters lose their center, and the play moves beyond its earthly confines, the visual landscape of this production fails to move with it.  Though Prior’s bed untethered from the world, floats loose in the snow of Harper’s hallucination, this is only one ethereal moment.  We needed more visual poetry to honor the textual poetry of the play.

One place where Elliott added such a visual flourish was in the character of the Angel. Though the character is performed by Amanda Lawrence, she is also manipulated and moved by puppeteers.  With her larger than life wings controlled by a team of movement specialists, she is like a frightened bird trapped inside a house.  She darts with dangerous movement, unpredictable flutters, and ominous overtones.

But these puppet performers gain additional tasks as the play wends on.  Looking like the daemons from His Dark Materials, they double as stagehands who move the furniture on and off stage. As they gallop in and out in a very interpretive dance meets street dancing way, they often feel like less of a choice and more a practical solution once Elliott had dumped the revolves and needs to move scenery in and out quickly. But wrapping someone in dark spandex does not make them invisible. And their presence/non-presence is mostly distracting.

Elliott relies on a score by Adrian Sutton which reverberates like heralds with loud, brassy horns but it’s ugly, heavy-handed, and brash.  Imagine trumpets burping out something like Sprach Zarathustra.  The play may shout at times, but the music unfortunately screams on top of that—portentous rather than prophetic.

But the cast mostly overcomes these frustrating aspects of the production.  The energetic and excitable Joe Mantello as Louis Ironson on Broadway becomes a more hesitant and measured Louis with James McArdle in London. His worry is less neurotic and more agonizing. His battle for his own sense of self-understanding is halting and contradictory and not as convinced of his own assuredness as Mantello.

Andrew Garfield’s wispy frame and tremulous gestures match the modulated voice he adopts for Prior. Frequently high-pitched and performative (particularly in the intentionally high camp moments), his Prior cannot butch up his persona as Louis does at times. As a former drag performer, Prior revels in a more feminine aesthetic anyway. Garfield therefore cranes his neck and preens. He often moves as if the cabaret spotlight is still on him. He likes being looked at but then remembers he is ill and that conflict of defiance and self-confidence crashes into his newfound debilitation. Garfield shows Prior physically wrestling with being alive while at the same time dying. He manifests that physical struggle through elongated limbs and a fierce ever-present resoluteness. There is no shrinking of his being even if his body is betraying him.

When in the privacy of his home with Louis, Garfield plays Prior as softer, quieter, and less performative. The public and private Prior has never been so clear as it is here (and something we did not see from Stephen Spinella who originated the role on Broadway). Even in an intimate moment with Harper, Garfield’s Prior belies no pretense. They are quietly simpatico.

Harper is a complicated role and Denise Gough plays her with a cool minimalism. She's not high-strung or loud.  For a pill-popping, agoraphobic she's oddly chilled and muted. Harper is not funny or frantic.  This Harper is in essence already dead playing a ghost in her own life. This changes the energy and place of Harper in the play’s narrative.

In the original Broadway production, Marsha Gay Harden as Harper and Stephen Spinella as Prior, felt like bookends.  Frenetic and high-energy in similar ways.  For these two strangers, we saw the parallels of their lives—and when they cross into each other’s dreams/hallucinations this is strengthened. But here, Elliott plays them in contrast to each other particularly in Millennium.  For as much as Harper is dead, Prior is very much alive.  This change still works with the text but as a consequence, Harper becomes less a presence in the play.  The clarity her character can bring as she cuts through the bullshit of the men around her, has less of an edge with Gough’s softer delivery.

Russell Tovey plays Joe Pitt with more disgust and contempt for Harper. Yet as Tovey’s pleading, desperate neediness as Joe becomes more and more untethered, it increases in complexity—the unsuitability of his coupling with Louis is apparent from the start but they proceed in this romp in an “ideological leather bar” until Joe is undone and Louis finds his way back home.

Nathan Lane’s Roy Cohn is not colorful or comical. Lane plays him very much as a man and not a symbol. He's contained but still vicious.  Where Broadway’s Ron Liebman may have leaned on a certain oily, snake charm, Lane hardly bothers with the pretense.  He might faux apologize but in almost every moment you sense his personal agenda above all else.

Seeing the play now as an adult, I was struck most by Kushner choosing Prior--this proudly effeminate character--to bear the brunt of the physical torture and mythical adventure. It forces us to look at our ideas of strength, masculinity, and epic heroes, particularly as Prior is framed against McArdle’s Louis who is broad-chested, rugged, and a conventionally handsome man. Louis is also weak, cowardly, and ambivalent. And yet I understand his self-preservation, fears, limits, and cowardice more now than I ever did at 17.

I see the whiteness of the play now.  Any work that intends to wrestle with America, American democracy, and our system of law and justice must inevitably deal with whiteness.  Our “freedom” was built on the oppression of others. We have spent hardly any time at all reckoning with that.
The play’s focus on migration and freedom is the province of white people.  Belize keeps reminding us that his movement was not his choice and he has to keep calling out the characters for their willful blindness to whiteness.

But is Belize’s voice enough?  Not if this was a work written today. It does however consider the oppression inherent in race, religious, gender, sexual orientation.  The intersections of these are only glanced at.  But having seen revivals of other work from the 90’s recently I was struck by Angels doing more at a time when most plays were doing nothing at all on these fronts.

But we have to keep asking the question of all revivals.  Why now?  What part of the past are we able to converse with here.  Kushner’s play remains an important text and perhaps can be a helpful reminder of how much that was radical has become mainstream.  But we need to not stop demanding such radicalism.
Posted by Nicole S at 9:59 PM

Email ThisBlogThis!Share to TwitterShare to FacebookShare to Pinterest
Labels: Angels in America, London, Out Of Town Theater, Tony Kushner