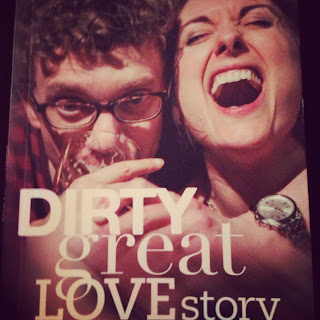 Sometimes you're just a man standing in front of a girl...who's vomiting on your crotch.  Dirty Great Love Story is a rom-com that is unexpectedly equal parts Bridget Jones and Jane Austen-- with unspoken feelings of affection that you struggle to voice and fall-down-drunk moments where boobs pop out of tiny tops.  Dirty Great Love Story is a lo-fi, poetry-based play, directed by Pia Furtado, that played Edinburgh Fringe last year and is closing the 2013 Brits Off-Broadway series.

Richard Marsh (Richard Marsh) is at a stag do (bachelor party) and Katie Bonna (Katie Bonna) is at a hen do (bachelorette party) with mates Westy (Marsh) and CC (Bonna) (respectively).  Stags interfere with hens and Katie and Richard meet, somewhat less than cute.  In a drunk, wild night out at a club they have a one night stand.  Richard wants more but Katie, just out of a relationship, runs off.  They each feel something for the other but their timing is off.  For two years, at barbecues, weddings, births, and christenings, they crash into each other like student drivers, and it's awkward moments and missed opportunities which are hard on them but a delight for the audience.

The play is largely prose but it also involves rhyming poetry at times.

Katie: "Our wife-to-be drags me from his face, Shaking her ass and flapping her L plates.  She struts, fiercely unlike a bride, To Beyoncé's Single Ladies war cry."

It's pretty clear from the title that this show was not going to be G-rated.  I suspect the more explicit material was the reason an older man left within the first few scenes and never returned--but those who stayed raved about it after.  Unfortunately I saw it with a particularly quiet matinee crowd and this poetic, contemporary love story involving naked tea making, sex in a tent, and blow jobs deserves to also connect with a younger, livelier crowd.  And with more-than-affordable ticket prices, a winsome cast, and relatable subject matter it should do so!

Like any good rom-com the pregnant possibilities of the romance will carry the day if the leads are charming enough, the writing buoyant, and the lovers' mishaps arrive in frequent intervals.  Marsh and Bonna are co-writers and stars of the play.  Ultimately it rests on their shoulders to make this work and they successfully bring to bear their inner-screwball comedians.  Marsh is the nerdy (ergh "Not classically handsome") but noble knight who rescues Katie whenever he gets the chance but he also says the stupidest things and uses humor at the most inopportune times. Bonna manages to make Katie's relationship-bumbling endearing and her wackiness and indecision become the foundation for why Richard falls for her. Of course I'm partial to Katie because she makes music festival spreadsheets.  Who doesn't organize their entertainment into a spreadsheet?

There's no set to speak of save two chairs and two screens.  There are no props. Changes in lighting indicate changes in setting. Everything falls to Bonna and Marsh who juggle not only their main characters but several side characters who are as distinct  as the leads.  With different accents and unique character traits it is easy to keep track of all the characters and who is speaking, and it never gets in the way of the storytelling.

The play provides the stomach-lurching fear (What if they don't get together?!) and twitterpated hope (They have to get together!) that a good rom-com should.  Katie and Richard make all the mistakes people make: loving unsuitable people, focusing on the wrong things in relationships, not quite seeing what's right in front of them, and struggling to articulate when they do.  Sweet and funny, Dirty Great Love Story is a carefree piece of affordable summer entertainment worth checking out.

There's only a week left!  Get your tickets.