It's Always Right Now, Until It's Later: Daniel Kitson in New York 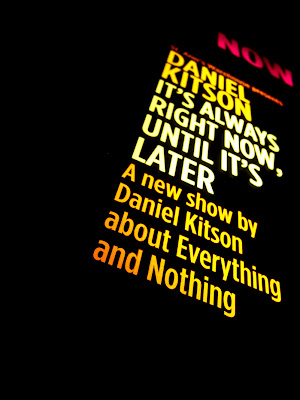 As I have previously reported (ad nauseum) Daniel Kitson, monologist/storyteller extraordinaire and my someday boyfriend* has returned to St. Ann's Warehouse in Brooklyn this month to present his show It's Always Right Now, Until It's Later.  Though I saw the show during it's sold out run at the National Theatre in London (and loved it) I was excited to check it out at St. Ann's.

St. Ann's is much more intimate and suitable forum for this show than the National Theatre.  The staging was similar to the staging at the National with an array of naked lightbulbs hanging from the ceiling, a chair and a small ladder (and a mug).   Each lightbulb represents a moment in time and they brighten when Kitson speaks of that moment.  He races from lightbulb to lightbulb as the show moves through time.

Because of the smaller space the acoustics are much improved.  It makes a world of difference because Kitson's rapid-fire delivery is an auditory workout.  I miss to some degree a bigger stage for the simple visual effect of the distance in time between the lightbulbs.  But I prefer the smaller stage overall because the stories are so much closer to the audience.  It seems more urgent and relevant when it is right in your lap.

The limited description about the show being about "Everything and Nothing" makes it hard to prepare an audience for what they are about to see.  I think keeping an open heart and mind will serve you well. 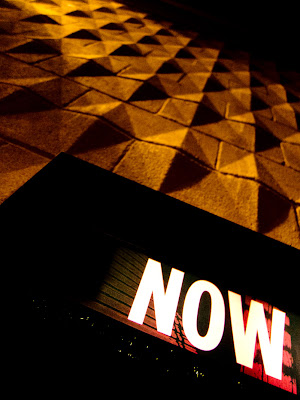 In It's Always Right Now, Until It's Later, Kitson tells the story of two lives: one of William Rivington and one of Caroline Carpenter.   One story is told from death to birth and the other from birth to death.  The narratives are interwoven though time but notably their lives are not.  Expectations for this being an epic love story are kept at bay (William and Caroline will not fall in love--he makes this clear up front).  These stories are largely about the moments in these two lives that would otherwise be unremembered (even by those that lived them).  Kitson describes life as a deluge and these moments are mere drops in the ocean of that flood.  They are ordinary people and their lives are ordinary.  But what takes place on stage is anything but.

From graveyards to backyards, the two characters are fully drawn people even if we see only glimpses of their lives.  We've heard their joys and their tragedies.  We've seen them love, laugh and cry.  As Kitson says, we have only heard some moments in their lives but "our brains fill in the gaps"** and we think we know them, but in fact "there are no gaps" in time.  The fabric of time is that constant flood even if we do not stop to reflect on every moment.

Kitson's love of language illustrates these moments with sensory precision--the consistency of a wet newspaper, the defeated feel of rain-soaked socks,  the sound of panicked running in slippers, the symphony of cutlery during breakfast.

I tend to leave the shows a bit suspended in my own time.  It's hard to just walk away with the many images, words, and emotions about these stories still fluttering through my mind.   The transformative power of a voice, that can take you back in time.  The pain of betrayal and the unbelievable power of forgiveness (no matter how long you've waited for it).  The dreamy reverie of thinking about one's future when it stretches out before you.

It is very easy to get swept up in Kitson's verbal torrents.  He has a rhythm and beat to his delivery and abruptly moves from the profound to the banal delivering humor from the juxtaposition.  No matter how many times I've seen this show (if we are keeping track, so far 3 times in Brooklyn with a total of 9 times I hope by the end of the month) I still struggle to keep up with every vignette.  Most of the time it's because I start laughing and get distracted.  For all the profound messages or rich text, this is also a funny show.  He's basically made it so I can never look at a park bench in the same way again.  Forever changed.  He also breaks character and for different reasons at different shows, so it often feels that each show is slightly different.

I saw several performances where he seemed to be finding the temperature of American audiences for his delivery.  He seemed to revel in vocabulary and cultural differences but refusing to pander to American audiences just because we don't all use the same words ("Ladybird...I believe you call them ladybugs."  "Eggy bread is French toast but I'm not going to call it that."  "Do you have garden centers? Cause that usually gets a laugh in Scotland and England.").  Although I did notice that one night he changed the phrase "tuck in" to "dig in."  I sort of miss "tuck in" now.

He had a few incidents of cell phone use in the theater and he stopped the show and suggested to a house manager that the manager should punch the cell phone user in the face next time.  Concerns over his stuttering also met with a sharp retort: "I stutter.  If this makes you uncomfortable, you're a bigot."

Despite his repeated insistence in asides to the audience that he is not an actor, he brings to life an array of characters in this show.  Beyond William and Caroline, he introduces us to their family and friends.  As I said before, the strength of this particular piece is that it feels as if Kitson has the god-like ability to turn on the audio of humanity's inner monologue.  What I've come to appreciate, after seeing it several times, is that he's able to hear the age-specific nuances in that audio track for people at different stations in their lives.  He captures the wonder, hope and possibilities in the minds of teenagers.  He penetrates the ambivalence drifting through the mind of a married woman and young mother.  He recounts the anger and frustration of someone who has passed love by.  He drops all pretense for an older man facing his mortality.  Each voice seems real, relevant and honest.

I like stories that are about moving through time, reflecting on the choices made, and what it all means (see Arcadia, Follies).  This show seems a natural extension for me of the type of material I like.  You cannot leave without it making you think of your own life--your own moments unexplored.

I stumbled across this lovely quote by Shelley via the Morgan Library and it immediately seemed relevant to this show:

"Life, & the world, or whatever are called that which we are & feel, is an astonishing thing. The mist of familiarity obscures from us the wonder of our being ... Life, the great miracle, we admire not, because it is so miraculous. It is well that we are thus shielded by the familiarity of what is at once so certain and so unfathomable, from an astonishment which would otherwise absorb and overawe the function of that which is its object." (emphasis added)


Watching the light dance and refract through Kitson's eyeglasses as he wraps his hands around the lightbulbs telling his stories, I am warmed at the thought that for at least 90 minutes I'm in absolute wonder.  It's Always Right Now, Until It's Later dissipates the mist of familiarity and gives us back the wonder of our being with beauty, honesty and humor.  What could be more amazing than that?

*I jest though I'm sure he'd make a lovely boyfriend and certainly he should feel free to get in touch with me while he's in town.  I have a working kettle if that is a selling point.

**Quotes are my best estimation of what he said and may not be 100% accurate.  This pains me as I expect he's very precise about his word choice and I'm sure I've not gotten his quotes exact.  There are no scripts of his shows and I didn't want to be called out for scribbling away during the show.   So the errors are mine.