on February 06, 2012
The final production of The Bridge Project is a relatively straight-forward interpretation of Richard III with an egomanical, drama-terrorist leading the charge.  Alternating between pure sarcasm and blustering anger, Kevin Spacey's Richard III is a comical grotesque in a production that otherwise tries to take Shakespeare seriously.  An impressive physical performance, I was otherwise disappointed that he made choices that seemed to undermine the text and were difficult to reconcile with the rest of the production. 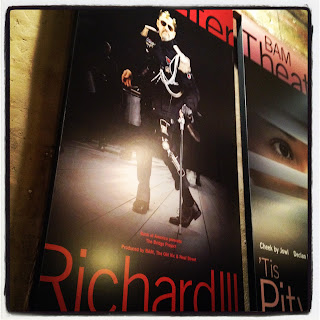 The production was highly inconsistent. There were some stand-out aspects of the direction.  Great use of projections to keep the complicated narrative of the history play straight.  Loved Queen Margaret chalking off after each execution and the infinite space when the stage opened up.  Gorgeous percussion work that ultimately was a full-fledged character in the play.  The percussion created tension, rhythm and colored the tone of the scenes magnificently.  I'd just give a Tony to the guy beating the shit out of the drums.  Hugh Wilkinson, Mildly Bitter has a special Tony for you.


Some performers seemed to understand what they were doing and why they were there.  Gemma Jones was wonderfully creepy and menacing as Queen Margaret.  Haydn Gwynne managed to walk the line between anger and grief delicately.  I liked Gary Powell in his role as the first murderer with a sort of Vinnie Jones-type swagger.  Chandler Williams had some nice moments as the Duke of Clarence trying to argue his way out of an execution.  And on the one to watch tally, Nathan Darrow was a handsome and compelling Earl of Richmond.   But the larger roles were significantly more problematic. I struggled to understand the relationship between Richard and the Duke of Buckingham (Chuk Iwuji).  Maureen Anderman as the Duchess of York paled in comparison to Gwynne and Jones.  Annabel Scholey, as Lady Anne, had a difficult job of turning anger into attraction with Richard and Spacey was not a helpful partner to make that scene work. 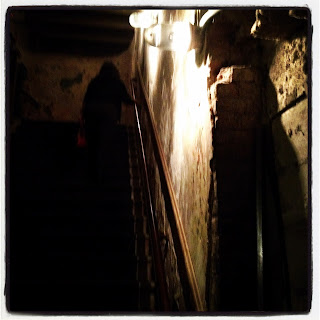 Spacey, as expected, just chews up the scenery but I felt like he also was chewing up the text.  There was a lot of literal chest beating happening and I kept thinking, just speak the lines.  The lines are going to do a lot of the work.  You could "try" less and give over more to your writer and director.  And it would be one thing if the entire production was in on the winking and aping but it was just Richard.  Yes, he's on his own plane and marches to the beat of his own drummer, but it was like he was in a different play than everyone else.  I just feel like he hijacked the entire production and everyone else was doing their best to just go along for the ride.

I am looking forward to see Mark Rylance do Richard III in August at the Globe in London.  I know the role is big and showy but there are other emotions to the character beyond sarcasm and rage.  In fact, when Richard starts to have his breakdown at the end, there was a glimmer of Spacey making interesting emotional connections.  But it was too little too late for me.
BAM Bridge Project Chandler Williams Drums Muthafucka Gary Powell Gemma Jones Haydn Gwynne Hugh Wilkinson Kevin Spacey Nathan Darrow Off-Broadway Richard III Shakespeare Special Tony