on March 30, 2012
Disney's Newsies The Musical has finally made it's way to Broadway and is a high-flying, upbeat adventure full of dreamboats and peppy melodies.  For some gals, Newsies finally making it to Broadway will fulfill a longtime dream.  No question the audience is full of die-hard fans who have been waiting a long time for this moment (and I wasn't even at the first preview where it is rumored the show was stopped by standing ovations and thunderous applause). 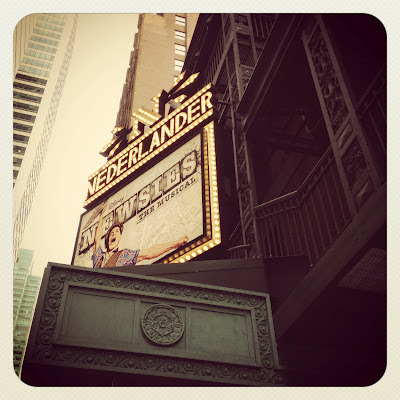 For those of us who have never seen the movie Newsies, it still has a lot to offer.  First and foremost, the cast of Newsies is led by the rising star of Broadway Jeremy Jordan.  Second, it contains some of the most high flying and dynamic choreography (by Christopher Gattelli) on Broadway.   It's a high energy show that has a quick pace, constant action (Jeff Calhoun's direction), and if nothing is actually happening someone will at least be dancing (given the preference I vote for Ryan Steele who is otherworldly--talk about defying gravity).

The story is simple.  The Alan Menken music is giddy with a few belt 'em out high note numbers to make you pee yourself.  It's a lovely Broadway meringue.

Set in 1899 in New York, Jeremy Jordan plays Jack Kelly, the leader of a rag-tag group of young newsies who hawk newspapers for a living for Joseph Pulitzer until Pulitzer decides to raise the rates the newsies must pay.  Kelly leads the charge to resist this rate increase which puts his best friend Crutchie (Andrew Keenan-Bolger) in danger.  He organizes the newsies all over the city with the help of the more articulate Davey (Ben Fankhauser), gets press for his efforts with the help of local journalist Katherine (Kara Lindsay) and attempts to creates a union of not just young newsies but child workers all over the city.

What makes the show work for me is Jeremy Jordan.  My main "complaint"-- not enough Jeremy Jordan.  He is absolutely adorable and charming.  Heart-melting when he needs to be (seriously swoonworthy in the scenes on the rooftop--massive girly sigh).  Say what you will about Bonnie & Clyde but it demonstrated that Jordan has acting chops beyond just his killer voice and his handsome looks.  He is absolutely a delight to watch here but I felt like he did not have very much to do.  Don't get me wrong I am happy to have Jordan on Broadway, now and forever.  I just wish this role was meatier because he can do more.

The rest of the cast does a fine job with the light-hearted material.  Like I said Ryan Steele is an incredible dancer but most of the time I was just struggling to keep up with which cast members were tumbling, leaping, and flying (additional stand-outs were Ryan Breslin, Andy Richardson).

My nits...are of the mildly bitter variety.  I wished there was a bigger cast (fill the stage with more cute newsies).  It gets a little silly when they are "recruiting" newsies from other boroughs (in particular they need Brooklyn on board) and the Brooklyn newsies show up...and they are the same guys we've already seen as part of Kelly's gang.  It just makes the show feel a little anemic and cheap at a moment when it should feel lush.  The set is not my favorite.  It's functional (metal frame work that is moved around a lot to accommodate multi-level dancing and performances with a little projection added) but not particularly inventive and did not really give a sense of place for most of the show (though worked well as the rooftop/fire escape dwelling of the boys).  The love story is fine but I was not a fan of Kara Lindsay.  She reads so much older than everyone else and was dressed by someone who clearly hates her and believes that synthetic dyes were significantly more advanced that I believe they were in 1899 (Holy bright palette Batman!).

But really none of this matters.  Every girl (and some guys) will have a favorite Newsie hottie by the end.  You'll be impressed with the incredible dancing and singing and you'll have a fab time if you just go along for the light-hearted ride.