Tribes: A Struggle Being Loved, Seen, and Heard

on March 05, 2012
If a Lifetime movie about deaf culture and Tom Stoppard had a baby, it would be Tribes by Nina Raine. I mean that in the nicest way possible, because the play could have drifted into treacly sentimentality, but instead Raine takes an erudite and often funny approach to language, character and story and offers a robust play that explores characters struggling with how they communicate and how they love. 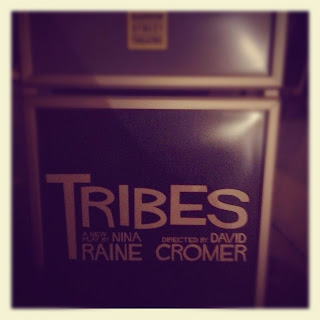 Presented by the Barrow Street Theatre and directed by David Cromer the play is about, Billy (Russell Harvard) a deaf college student, who has always read lips, who meets a woman, Sylvia (Susan Pourfar), who grew up with deaf parents and is now going deaf herself.  As his relationship blossoms with Sylvia and she teaches him sign-language, his tacit acceptance of his family dynamic starts to unravel.  His father, Christopher, is a tyrannical wordsmith, professor and author (Jeff Perry) who browbeats his hearing children Daniel (Will Brill) and Ruth (Gayle Rankin) demanding they live up to high levels of academic and social achievement but at the same time remain unconventional, criticizing them at every turn.  Allowing this to go on, quite passively, is his wife Beth (Mare Winngham) who also suffers at her husband's sharp tongue.  The family is quite insular and speaks in rapid fire, with their own language and their own sense of humor.  Billy has spent a lifetime watching and observing this family (and is the most sensitive to everyone's feelings) but never fully participating in this family or its sport.

At each step where you think the narrative or emotional beats are going to go, I found the playwright shifted those expectations.  Where things could turn maudlin there was something in the writing that kept it sharp and strong. Although it is about rather obvious themes of family, love, finding your voice, and becoming heard (I know that sounds rather barf-y but trust me in this play it is not), the execution managed to avoid cheap sentimentality and gave us fully shaped characters worth watching.

As much as the story is about Billy and his transformation on one level, we get to see quite a lot of Sylvia's struggle as she loses her hearing and what that means to her.  In addition, Daniel, Billy's brother has auditory hallucinations and a stammer and as Billy gains independence and establishes himself as an adult, Daniel's health issues worsen and he starts to fall apart.  We also get to see the family have to take a look at itself and what this accepted dynamic has done to each of them.  None of them seem to enjoy it but none of them are willing to question it either.  But oddly you do believe they all love each other even if love is communicated through criticism, provoking and aggression.  As Daniel says with resigned acceptance, "Abusive love is all that is on offer here."  Although, the playwright tried to squeeze in a lot of plot strands and in the end not all of them were fully developed, I appreciated the strong character work.  I felt similarly about another Royal Court play I saw in December.  But I'd much rather see a play try and fall a bit short than not try at all.

Although British accents seemed to come and go, and they did not sound like they were all from the same part of England, the performances otherwise were strong and believable.  Russell Harvard is a deaf actor and was very charismatic and compelling as Billy.  Will Brill was heartbreaking as Daniel and I often wished to know more about his character and his story. Susan Pourfar was fierce as Sylvia and offered a unique perspective as a deaf person who has lived both in and out of deaf culture.  I feel like I have met opinionated and strident fathers like Jeff Perry's Christopher.

Cromer staged the play in the round which made it very difficult to see the actors and their reactions a lot of the time.  Giving him the benefit of the doubt, I think he was trying to parallel Billy's struggle to be involved in conversations when people moved around and he could not read their lips.  It might have been an interesting intellectual choice but besides my mild annoyance at this format I did not feel like it added to the play.  The writing and performances demonstrated the struggles with "communication" quite well and this direction choice undermined this.  There were subtitle projections used in varying ways throughout the play to represent the sign language, to illustrate songs being played and to say the unspoken.  They were highly inconsistent and I wished they were either used more or less to better effect.