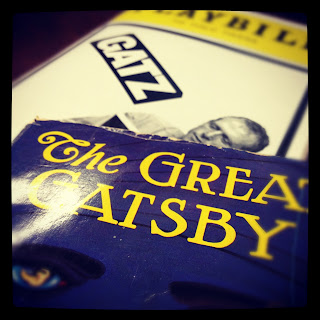 After staring at Scott Shepherd for close to six hours, I finally figured out who he looks like:  Calvin of Calvin & Hobbes, grown up.  Ok.  Now that that is out of the way...he is a tremendously talented actor and the main reason to see Gatz.

Shepherd leads a cast of actors in a "reading" of The Great Gatsby.  He plays Nick Carraway and as Nick he narrates all the action.  His fellow-office workers join in and portray the characters from the novel.

This is the second production by the Elevator Repair Service I have seen.  It seems in both productions they are keen on stripping away emotion, using a highly stylized soundscape, and playing against the grain of the texts they are interpreting.   Rather then elucidate the author's intent, they are focused on their own deconstruction. Sometimes this creates interesting theatrical moments but at other points weakens Fitzgerald's emotional arc from the book.

In the end, my attention, my focus and my emotions were all bound up in Shepherd's performance.  Thankfully he is the main force of the production.  He had an accent and intonation that made the book sing.  He brought the pages to life.  His comic punctuation of various lines in the book were sharp and cutting.  In those moments of observation--where Nick the office worker steps back and comments on Nick Carraway the character-- we are given the most perspective on the novel and the most theatrical color in the play.  And I loved every minute of that.  There were times I wished Shepherd were playing all the parts.  You don't realize how versatile a performer he is until he breaks into another character, in particular Meyer Wolfsheim, and suddenly he is transformed.

But the remainder of the leads were a real challenge.  I struggled with Susie Sokol as Jordan Baker from beginning to end.  Her comic choices, her blank stares, and her terrible costumes were a constant distraction and the challenge for me to get through in the first two hours of the piece.  Her character shows up less and less as the play moves on.  I did not like her at all in The Select and I continue to not understand why she is cast in these productions.  She seems just wrong for the role and does nothing to add any shading, character or understanding to Jordan Baker. Victoria Vasquez as Daisy fared a little better but not much.

Worst for me was Jim Fletcher as Gatsby.  I have no idea why they would cast him in this role he is so ill-suited for.  He takes a character I have always had some level of sympathy for and makes him at his base, creepy and as time goes on dull and passionless.  If there ever was a Gatsby I'd want to shoot in a pool, this would be the one.

The idea that office workers take on roles in the book and start to perform alongside Nick might lend itself to some odd casting choices* conceptually but as a production...and a long one at that, I would think you'd want actors who would bring the emotional core of these characters to life...unless ERS actually is not interested in the emotional core.  I'm not sure I understand enough of their theatrical mandate to know what their goals are.  But I found Shepherd's performance of Nick to be very emotional.  If they wanted to focus all emotional attention on him, and leave none for the other characters then they succeeded.

I liked the staging in the office.  I felt the flow of office activity into the book scenes worked seamlessly.  I accepted the premise and did not get too caught up in the why of it.   I loved the soundscape here (props to Ben Williams who does double duty as onstage sound designer and actor) far and above the comic punchline one in The Select.  It really gave a sense of place and time.

Theatrically, the work is sustained by Shepherd and he would be the reason I would recommend people see Gatz.  Did it change my life?  No.  Was it the most fascinating theaterical experience of my life?  No.  But did I enjoy the language of the book, the character of Nick Carraway, the sense of place and time? Absolutely.


*Also why is the hottest guy in the cast mainly the sound designer and only the sometimes actor.  Please utilize Ben Williams more in your shows.