Cyrano: Too Much Jekyll & Hyde


Remember that scene in Tootsie where Dustin Hoffman's character Michael Dorsey gets into argument with his director over having to stand up during a dying scene as Tolstoy...yeah so that basically happened in the Roundabout's new revival of Cyrano de Bergerac.  They make a character who is seriously dying, walk whilst dying.  My brain could not quite reconcile that awkward directing choice with the lovely heartfelt speech Douglas Hodge was giving...so half my brain wanted to laugh while the other half of my brain called for tears.  I can't recall a more Jekyll and Hyde theatrical experience.   I saw the show in previews in a few weeks ago and looking back I was disappointed by much of the production but enjoyed aspects of Douglas Hodge's performance. 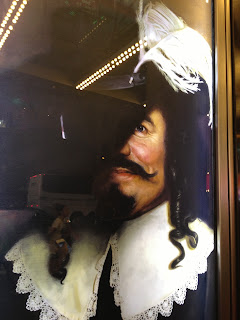 This production is directed by English director Jamie Lloyd (who directed Hodge last season at the Donmar Warehouse in Inadmissible Evidence) and it boasts a new translation of Edmond Rostand's play by Ranjit Bolt.  Though the new translation may throw in some saucy words (they say "turd"), on the whole this production did not feel modern, just messy.

Douglas Hodge when given to quiet moments and Cyrano's own true feelings of Roxane he delivers a romantic and delicate reading.  There is something in the timbre of his voice that communicates emotional fragility (and what made him so tremendous in La Cage aux Folles).  He delivers longing and pain with ease and that's where he got me.  But when Cyrano is to be the dueling, warring braggard, Hodge's performance loses its appeal.  He doesn't seem to have that larger than life personality to carry the big moments.

I was taken with the themes of a man trapped in a life dictated by his principles--such that he is penniless, surrounded by enemies, and without love.  But he cannot compromise even a little ("Unpopularity is my stock in trade.")  Yet, he compromises in one place--in love--and it it has given him only suffering.  He gives Roxane the love she thinks she wants at great cost to himself.  It's a beautiful dramatic sacrifice and I think in the final scene, despite the unintentionally comic blocking, it was the emotional build up of Cyrano's life of sacrifice that I connected to emotionally and Hodge delivered on.

Sadly, there was a lot more play than that and it was largely without poetry.  The duel of words and swords scene fell flat.  The sword blows may have landed but the comedy did not.  It felt hurried and the language in this translation just did not seem to find the laughs the material usually provides.  The show lumbers along.  It took until the wooing of Roxane for the play to grab my attention and it was a while in coming.   Others may not have the patience to wait.

I was curious to see British actor Kyle Stoller make his Broadway debut here as Christian, the object of Roxane's affections.  But sadly he's clad in a greasy blond wig (!) and given very little to do.  How can you make Christian look bad!  Come on people. Patrick Page, as always, delivers a vibrant and venomous performance as Cyrano's nemesis of sorts, Comte De Guiche (and one cannot help to think what kind of Cyrano he would be with his robust voice and classical delivery).  Clemence Poesy, as Roxane, seems to always be sending young men off to war (the last time I saw her was in Birdsong on PBS...which appeared to just be a movie about war and the lust for Eddie Redmayne's cheekbones).  She was fine here as the sweet French girl, but it's a thankless task.

Charlie Rosen (formerly of The Craze USA in One Man, Two Guvnors) did the music for this production.  There were some sweet and lovely string-driven interludes between scenes. The multi-leveled set was used to excellent effect in the second act.

It made me mad I missed the Kevin Kline production in 2007.  Oh theater regret.