Who's Afraid of Virginia Woolf?: Get the Guests 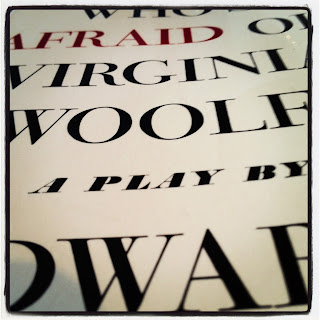 On it's 50th Anniversary, Edward Albee's Who's Afraid of Virginia Woolf? is in very good shape.  The Steppenwolf production directed by Pam MacKinnon (Clybourne Park, Completeness) carves out a space for itself as a unique interpretation of the play.  Not all of the aspects of the production worked for me, but it's remarkable that something I thought I knew well felt new and different.  There is no question that if you want to see an excellent production, this one is worth the time.

Don't be lulled into believing that this messy, but inviting wood-paneled living room filled with books and bits of a couple's life is anything but a boxing ring or a battlefield. For me, Tracy Letts comes away as the clear winner in this knock-down, drag out production.  George (Letts) a college professor and Martha (Amy Morton) his wife, also the daughter of the University President, invite over a young couple, a new teacher (Madison Dirks) and his wife (Carrie Coon), for drinks after a faculty party.  But nothing is what it seems in this Broadway classic.

With a gorgeous set (by Todd Rosenthal) and fantastic sound (by Rob Milburn & Michael Bodeen) and lighting design (by Allen Lee Hughes) (I could hear the sound of morning birdsong and the light of dawn through the open front door at the end of the show), this show demonstrates what top tier Broadway plays can do.  This production highlights some tremendous performances by actors I had not seen before.  Carrie Coon made for a delightful Honey.  She's dim, drunk and delicate all in the right places.  Madison Dirks plays a smarmy Nick who feels more deserving of the take-down he gets in the end.


For me Tracy Letts was a revelation.  Letts's George has more presence and an equal part in the drunken and dark parlor games he and Martha play on the unsuspecting late-night guests.  Letts shouts, cajoles, teases, and suffers.  With each, scene and each aspect of George's personality, Letts finds creative and nuanced ways to communicate his character.  But unexpected was how much this George tries to take control of the evening.  He's a larger presence in the work here than I felt like I remembered from reading the play.*  He's smart, conniving, and insidious.  And he's also heart-breaking.  When he's left on his own and Martha has taken his bait, his quiet suffering was hard to watch.  Letts physically carries the exhaustion of a lifetime of George and Martha's "fun and games" on his shoulders.  They made a choice to not play to a bigger, braying Martha here and George manages to fill the void.  I enjoyed seeing Letts tear into a more relevant and substantial George, but the shifting balance of power between George and Martha felt off because of this.  If the scenes usually have a feel of boxing rounds to them, the final knock-out, George's take-down of Martha, does not quite feel like its warranted.  It feels even slightly more malevolent than a return to equilibrium or an absolute necessity.

Amy Morton was last seen on Broadway in her Tony nominated performance in August: Osage County, written by Letts.  So there is no question she knows how to handle difficult material and does so with humor and pathos.  Here, Morton's Martha is a wholly different "monster" than Elizabeth Taylor's film version (I never saw Kathleen Turner's version in 2005).  She's no snarling beast.  She's not ugly drunk.  She's calm and much more sarcastic than caustic.  Morton's comic timing is sublime.  The entire production feels a lot funnier than I would have expected, and is endlessly enjoyable, yet this comes at a cost.  The emotional wallop that should come late in the play misses its mark.  I never felt Morton lets the audience in.  She does not drop her guard as Martha.  Even in the speech where she speaks to her own vulnerabilities, she comes across as detached and didactic.  As a more naturalistic, and less exaggerated Martha,  it should have made connecting to her more likely.  She came across as rarely if ever drunk.  Maybe it all just felt too calculated, too within her power, too intentional to me.  I missed the wild swinging of a Martha who was not always fully in control so her oversteps were more regrettable.  I kept waiting for an emotional connection to this Martha and it did not come.


I saw the play twice. I was seated in the mezzanine for the first preview (and I received a complimentary ticket) and I paid for an orchestra seat in the second row the night before opening.  I thought maybe I was not being taken in emotionally by the work because I was seated so far away.  But being up close did not change the ending for me.  In fact, I found the wrap-up, dare I say, tedious ("sad...revelation dawning...sad....sad...[checks watch]...and scene.").

There was something about the high comedy and emotional withholding that made me start to wonder if MacKinnon was not actually following the rules of Albee's own game and actively working against the text in this production.  I'm not sure why I felt like I needed to defend Albee text after seeing this production but oddly enough I did.  He's alive and well enough to defend it for himself (I had no idea he requires the 1960's setting for the piece and objected to a stripped down set when that was attempted).  But there is something about this interpretation that, for me, felt like MacKinnon did not want to draw the same conclusions Albee does.  One friend suggested it was maybe MacKinnon working against Albee's hatred of women.

It's an interesting thought.  I have not read or seen enough Albee to make that conclusion.  And honestly, I love Martha.  I love Martha as the Harpie, as the bar room brawler willing to take anyone and everyone who comes at her.  I love how "strong" she thinks she is.  In a world where women have a particular a role she is not playing that role.  She is, and she isn't.  She is the dutiful daughter attending her father's cocktail party.  She is the faculty wife, who invites over the new instructor and his wife.  But she's so self-hating, so rebellious against being loved, being understood, being cared for.  She's a fascinating character and frankly maybe a little more real than we want to think.

No one leaves this play or this production thinking, "Those ladies are terrible.  Those poor men have to put up with so much."  Everyone is terrible.  They are terrible each in their own special way.  Martha is terrible because the only way for her to feel alive is to live off the carrion of her husband's soul.  But I never read it as all women need to ritualistically eviscerate their husbands on a regular basis.

Frankly this interpretation of Martha makes her look a lot weaker than I would have expected. I'm not objecting to trying to interpret the text in a new way but that interpretation should work for the entire piece.  Reinvigorating one aspect should still result in a dramatic payoff in another--unless the idea was to go for a cold, emotionally alienating finale.**


This is the second MacKinnon production where I felt like she used humor to deny me an emotional reaction.  I mean, not personally.  I don't think Pam MacKinnon is out to make me feel unsatisfied in my theatrical excursions.  I am still trying to get to the bottom of why the way she uses comedy alienates me.  It's like by foregrounding the comedy and really mining the material for "zingers" the underbelly of sadness, tragedy, and slow build toward drama is being neglected.  So when drama takes center stage (ugh...pun not really intended) the foundation has not been properly built for it and it cannot sustain the emotional weight.

Despite my strange internal battle with Pam MacKinnon I think the journey of this production, how George, Martha, Nick and Honey evolve is fascinating to watch and has only left me with lots to talk about.  And the more I talk with others about it the more there is to discuss.  Not bad for a 50 year old play.  Still pretty spry.

*They are working from the 2005 edition of the play (which kind of threw me because I was familiar with the 1962 version).
**My friends saw some people making out at the show and when we walked out of the theater another couple was literally sucking each others faces off.  Maybe this production makes some people randy.  I mean...weirdest reaction ever to WAOFVW.   #leastsexyshowever
Amy Morton Bitter Review Broadway Carrie Coon Madison Dirks Pam MacKinnon Tracy Letts