The Whale: The Weight of Sorrows 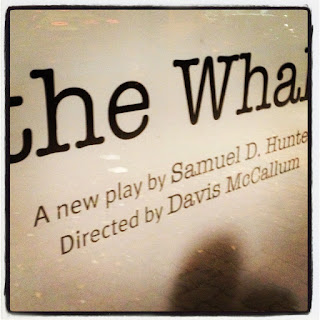 "You can't fit a morbidly obese gay peg in a Mormon hole," says Liz, a disgruntled nurse, about her friend Charlie to a Mormon missionary who has come knocking on Charlie's door.  But Samuel D. Hunter's The Whale is not about obesity, Mormonism, or homosexuality, though it deals with all those topics.  It's about how we connect to other people--when truth and lies bring us together or break us apart.  The flawed reality of human interactions. This play often deals in a type of honesty that maybe only comes to the surface when people are truly in crisis.

Charlie (Shuler Henlsey) has become a shut-in since his partner died.  Charlie's world consists of a sagging sofa where he spends his days teaching expository writing online and eating.  He only leaves the sofa only for exhausting trips down the hall to the bathroom.  His only regular visitor is unhappy Liz (Cassie Beck) who tries to care for him while spending every day berating him.  Unbeknownst to Liz, Charlie has secretly reached out to his teenage daughter Ellie (Reyna de Courcy), who has not seen since she was a toddler.  Charlie invites Ellie into his home.  Ellie is sulky, difficult, hostile and uncontrollable.  Charlie does not seem to mind these negative aspects of her personality.  Just her being in his presence seems to bring him some sort of joy.  One day in the midst of a possible cardiac episode Charlie calls to a Mormon missionary, Elder Thomas (Corey Michael Smith) who has come knocking on his door, to help him.  What calms Charlie in this episode is Elder Thomas reading an essay on Moby Dick. Soon Liz, Elder Thomas, Ellie and Charlie are all wrapped up in each others lives.

Hunter's clever, funny and ultimately bittersweet story is a painful pleasure.  He explores colorful characters, each in the midst of their own personal crisis, and elegantly and effortlessly brings all these stories together.  Like a puzzle, the oddball characters, may be oddly shaped on their own, but fit together here neatly.  Each serve as catalyst for another.  And these interactions, clicking into place, give the play it's fluid momentum.  The literary underpinnings to the play organically enrich the characters and the story without being heavily didactic.  The play is often very funny, but there is laughter through tears and then just tears as Hunter reminds us of the fragility of our humanity.

The writing here is an absolute joy but the strong acting ensemble, the brilliant stage design (by Mimi Lien) and direction (by Davis McCallam) all serve the fantastic material. The filthy room that Charlie lives in seems like a straight-forward livingroom space but as the play moves forward sound and lighting design show the space surrounding the livingroom as something else.  I'd rather not say what and let you discover it on your own.  But suffice to say it is a beautiful illustration of some of the poetic imagery in the play rendered through set design, lighting and sound.

It was great to see Corey Michael Smith again (Cock), here as a the skittish and earnest Mormon.  Reyna de Courcy is delightful as the irritating, out of control Ellie.  Shuler Hensley wears a massive fatsuit and you feel every labored breath of his performance.  But it's the radiant joy he manages to convey amidst all his pain that is his achievement here.

Right now, The Whale, is in my top 10 shows for 2012.  It's the kind of play that makes you feel hopeful for the future of the American stage.