The Flick: We Go On Living

It takes a confident writer to write a play full of pauses, repetition, and inaction. It takes trust that the audience will do the work--stay focused and engaged--to stick around for the payoff.  Practically a full row in front of me walked out at intermission of Annie Baker's The Flick. Not everyone has the tolerance for this kind of theater. But I was energized by every minute of it where questions of authenticity, honesty, and life imitating movies are thrown about. 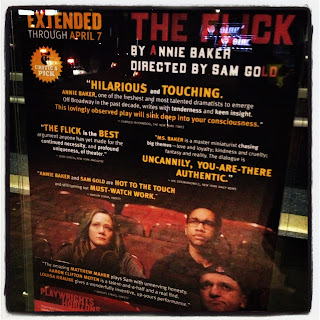 Sam (Matthew Mahar) is 35 and lives in his parents' attic. He's been working at this one screen dying movie theater for many years, sweeping the floors, pouring the sodas, skimming from the till.  He's also been hiding his crush on twenty-something projectionist Rose (Louisa Krause) who oscillates between rage and nonchalance. New arrival to the team is Avery (Aaron Clifton Moten). A college student at nearby Clark University, Avery is film savant who can easily get from Pauly Shore to Ian Holm or Michael J. Fox to Britney Spears in six degrees.  He proudly chooses to work at one of the last movie theaters in Massachusetts that still projects the films on film.  Issues of friendship, love, class, and race all get addressed but with deft hand.

The Playwrights Horizons audience faces an empty movie theater with the projector projecting out onto us as the screen.  The romantic film student in me loved watching the projector light bathe the live audience and make us the story for a moment--sitting in the one spot you would not sit in real life.  And all we could do is feel the bright light on our faces and hear the soundtrack without ever seeing the films.  This interstitial device was used throughout giving the play its rhythm and setting up scenes between movie screening times.  And anyone who has used movie-going as an escape from life can tell you that reality only happens when the lights come back up again--that heart-breaking moment when the movie magic is gone and you have to go home again.

Director Sam Gold moves his characters around the theater seats and in the projector booth where we can only see and not hear what goes on behind the soundproof glass.  Coaxing arias of awkwardness out of his cast, the yearnings, agonies, petty defeats, and life set-backs are borne nobly by the characters and actors.  Much of the action, emotion, and trajectory of the play is without words and the performances must carry the story.  The dialogue is often quite banal--banter over movie titles, chitchat about their "stupid" boss Steve, or tiny bits about their personal lives quickly brushed off.  But all the banality is all building to something.  The framework is there and Baker lays a foundation for each character and the confrontations that are to come later.

Unlike Really Really, where the writer felt the need to lecture us about the Me Generation, here Baker manages to let the story, setting and characters just be and we get a full picture of contemporary life without any lecturing.  She stuffs the play full of meaty topics like depression,  dead-end lives, economic realities, betrayal, and loyalty but all without grandstanding.  She makes each character portrait familiar but without stereotype--the unexpected and the unique are buried in there as well.  She takes monumental issues but plays them out locally such that they are not "issues" but simply life.  And unlike Really Really there are characters here with hope ("I'm so curious about my future") and characters adrift ("Don't expect things to turn out well in the end.")  And maybe they aren't the ones you think they are.

Baker's strongest takeaway is reminding us that we never know what is in the heads of those around us.  That we can even communicate with each other all the while not knowing what is in others hearts is worth recognizing and appreciating.  And to assume we know is to often be made a fool of when we underestimate people's capacity to face pain, rejection, life and keep moving forward regardless.  Time moves only in one direction and to quote Tom Stoppard, "we must stir our way onward."

Gold gives the actors ample room to make these characters breathe.  Matthew Maher looks like Hamlet after being struck with a poisoned sword when Rose and Avery make plans to hang out, without him.  We know Sam pines for Rose even though it has never been spoken of.  Though Rose's the dolorous blow may be with words, Maher's reaction is no less than that of a man whose is bleeding even if we cannot see the wound.  Later, Sam has a Gatsby-like moment where he confesses his crush--explains himself and his overwhelming "love." His feelings are so epic and painful, he cannot even face Rose in this confession.  It's a beautifully staged moment.  Making use of the rake in the movie theater and allowing the audience to stare directly into Sam's eyes as he experiences this moment.  But there is a twist here--Rose is no Daisy and she knows she's Sam's green light.

Important to Baker's work is that this "confrontation" is far from the end of this "story" and as in life, big speeches are not met with a curtain and a swelling score.  In the words of a singing vampire, "Life isn't bliss, life is just this, it's living....You have to go on living."  (Spike in Buffy the Vampire Slayer, Once More With Feeling--which by the way does end in a curtain and swelling score). And so they do.

Rose too has her suffering. Reaching out to connect with Avery her advances are not met in kind and Krause sulks and despairs without words.  This silent breakdown is a challenging feat and Krause makes great use of body language to convey Rose's disappointments.  Avery is meant to be a bit of a cipher and I struggled with Moten's performance.  He's meant to be emotionally distant but I wished in his performance he would have managed to have broken his walls occasionally and let emotion creep out when things escalated.  Unfortunately I found even at those moments, Moten was still too remote.

With confidence and delicacy, Annie Baker's play The Flick creates vivid characters, their quotidian lives, and reminds us that the unexplored moments in life, the every day in between moments of living are rich and worth paying attention to. Patience is a virtue and the patient audience is rewarded here in kind.