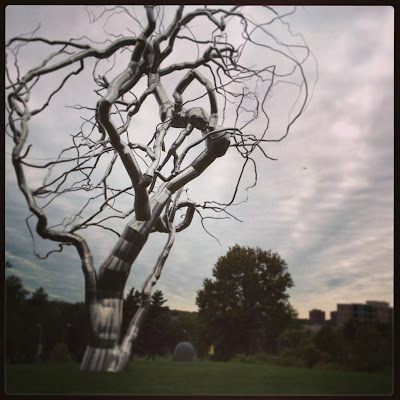 From a man in a tree looking down at the world as it passes him by, to a man on a romantic mission with nachos in tow, Daniel Kitson’s new play Tree is about relationships, commitment, honesty, fantasy, and heroism. What marks this play as a departure for monologuist Kitson is the fact that it’s a two-hander. Co-starring with Kitson is comedian and actor Tim Key. Kitson and Key act as comedic and dramatic foils to one another.

The production was staged in the round at Royal Exchange Theatre in Manchester for several weeks in September is not expected to tour.* It’s too bad as it was a wonderful opportunity to watch two comic giants do battle with each other on a very unusual field.

Like many Kitson stories (at least those of late), hidden in his storytelling are a trail of bread crumbs for a theme which might turn your head upon the reveal. Tree requires a certain amount of focus and commitment on the part of the audience as the story unfolds with quiet simplicity, and you might think this is much ado about nothing, yet there is a sneaky undercurrent at play.

Tim* is late for a picnic with Sarah. He arrives under the shade of a tree flustered and swearing. He finds he is being watched by Daniel, who is sitting up the tree. And thus begins our story—well, two stories really. Daniel wants to hear about Sarah and this unexpected picnic under his tree. Tim wants to find out, “Why you up a tree, mate?”

Tim sheepishly tells a story of romantic heroism, 10 years in the making. Daniel offers up his tale of living in “this tree” and being a somewhat accidental tree hero which “was a message…for a while.”

Affection develops between these two men despite Tim’s initial resistance to Daniel’s story (which Daniel admits might sound far-fetched in parts). Daniel’s character mentions his love of “beginnings” and like a child with a new toy seems positively giddy to hear what Tim’s story about Sarah is.  They find a shared love of megaphones, foxes, and a need for meaning in their lives. There is a burgeoning mutual admiration. But perhaps it is something more—an understanding of each other that runs a bit deeper than the banter that comes about because “we’ve got some time to fill.”

And yet almost as quickly as Tim and Daniel connect, their relationship unravels. Tim challenges Daniel's life in the tree, arguing that life on the ground is where it is at--"Down is good. This is the stuff."  But Tim may have his own reasons for attacking Daniel's commitment.  Daniel makes an allusion to the fact that all relationships (whether with people or our principles) have consequences—as you choose one person, you reject others.

And so Kitson explores the commitments we make in life, the meaning we search for, and the potential conflicts between those two endeavors. To do so he pushes the bounds of truth and fiction and the way in which stories are told.  If you saw Kitson's 2012 theatrical piece, As of 1.52pm, there will be familiar reverberations as Kitson continues to explore characters who go to extremes in their principles and what they endure because of their principled stand.

Tree is resplendent with quiet details, lovingly etched out. Kitson’s trademark vivid descriptions abound with the redhead in a yellow hat, shopping bags of haloumi cheese, and the exuberant joy of an expectant mother offering a feel of her baby’s kick.  I had forgotten how much I missed Kitson's storytelling voice after a year of seeing his stand-up. That voice has a distinctive cadence whether it is coming out of Kitson or Key's mouth. It takes me back to memories of my childhood and sitting rapt with attention at the feet of the local librarian during "story hour" eager to find out how the story ends.  For some reason Tree jogged these memories more than other Kitson story shows.


Key is, as always, a delight with his mock frustration and outrage but he was surprising as the romantic hero. His small moments of romantic defeat were surprisingly touching. He brought a vulnerability that was new to me (having only seen his show Masterslut and his recent WIP where he seemed to play up his goofy and exaggerated "Lothario" qualities).

Flitting about the tree like an excitable, ADHD monkey, I wondered what to make of Daniel’s stage business as he remained largely obstructed by the leaves on the tree. But despite his physical concealment, he managed to project beyond his leafy cover his character’s beaming, heart-swelling joy and casual disappointment which masked a heavy heart.

But what did it all mean? So far I have pondered at least four possible interpretations of the play…some of which I want to be true and others I fear might be true. In one scenario, it could be quite a bitter pill to swallow.  Others offer more hope.  Perhaps Tree is a mirror (forgive the tired metaphor but it remains apt) and the meaning of the play changes depending on who is looking in the mirror. Or like Schrodinger’s cat, is Tree telling us the cat** is both alive and dead?  Are all the possible scenarios true even if they are paradoxical?

At one point Daniel says, “You believe what you want, mate.”

And maybe I needed to believe "the cat" is alive. I wanted the mystery, the magic, and we write the stories of our expectations in our mind regardless of what the artists intend. Or maybe I am listening to too much Mike Daisey this week. I just want to believe.

* In a later email to his mailing list Kitson said they are trying to find a way to tour the piece.
**No literal cats here. All metaphorical cats.
Bitter Review Comedy With the Funny Daniel Kitson England Lies Out Of Town Theater Romance Tim Key Truth