16 Words or Less: Love, Loss, and What Kind of Flowers to Buy

"I'm trying to do some good in the world."

An absurdist look at bereavement, loss, and love, Peggy Stafford's play 16 Words or Less, tries to find humor in a world of dead relatives, cancer, and lonely people. 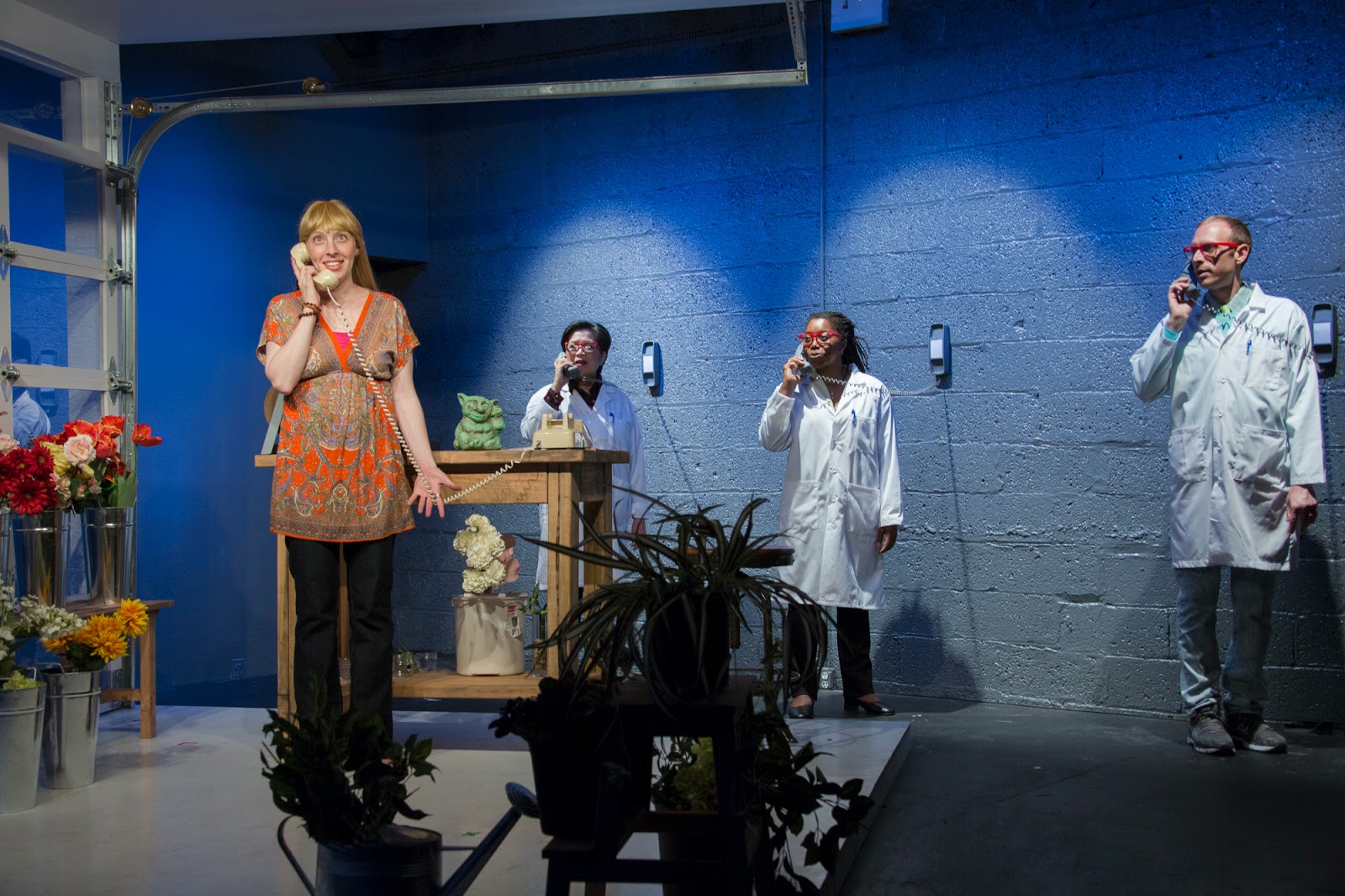 Crystal (Crystal Finn) works at the My Fair Lilac flower shop answering the phone all day long and editing her customers' emotional note card thoughts to 16 words or less.  She's conciliatory with everyone no matter how outrageous their demands.  Jonathan (Neal Huff) calls to buy flowers for his mother (Caitlin O'Connell) on the occasion of Jonathan's father's death even though they were no longer married.  Karen-Carly (Jessica Rothe) is a bubbly teen who wants to send flowers to her Bubi (Mia Katigbak) who just lost her cat to cancer. Over the course of the play the characters all transform--and I don't mean in a subtle, "growing as people" way over time.   They instantly become different absurd caricatures--Karen Carly develops a meth addiction, her Bubi has a baby, Jonathan becomes obsessed with the poetry of Rumi.

As anyone who has suffered loss knows, letting go is hard. Even if you know you must accept change it does not make it any easier. Crystal has had her share of loss and through writing these note cards for her customers she seems to find a connection.  But it doesn't stop the world or people around her from changing.  Crystal's go-with-the-flow attitude only gets her so far and she starts to wonder if perhaps limits are a good thing.


I've always struggled with absurdism on stage, whether Guare, Durang, or otherwise. I never find it strikes my funny bone.  I get that the humor is meant to lighten difficult topics but I'm such a character junkie.  I often find the characters in farce or absurd comedies to be so broadly drawn that I lose interest quickly.

Here, director Portia Krieger keeps the tone deadpan and relatively even across all episodes no matter how many kooky or crazy the ups and downs--save where things get out of control between Crystal and the intense Nick at Cancer Care (Clayton Dean Smith) who wants her hair for children with cancer.  In that moment, Crystal manages to act in her own self-interest and resists Nick's attack.  Though she is not unscathed.

The cast does the best with the material, but it never quite reached a level of wackadoo insanity to make the comedy work.  And it never delved too deep into anyone's issues to make emotional contact.

This is the last piece in Clubbed Thumb's Summerworks series for 2014. Supporting new American writers they have given this play a beautiful production. I loved Daniel Zimmerman's smart and flexible set.  A standout in the cast for me was recent Obie award winner Mia Katigbak as Bubi who managed to craft a fully drawn character out of a mere sketch of a Jewish grandmother.  Cutting through the absurdity, I felt for her.

The audience was warmer to this play than I was and I recommend you just go with the flow and ride the absurd wave to find some laughs and have a think about how loss can make you do crazy things.