R&J&Z: Zombies with a Side of Shakespeare

"Double suicide and reanimation creates a bond that is tough to break."--Juliet 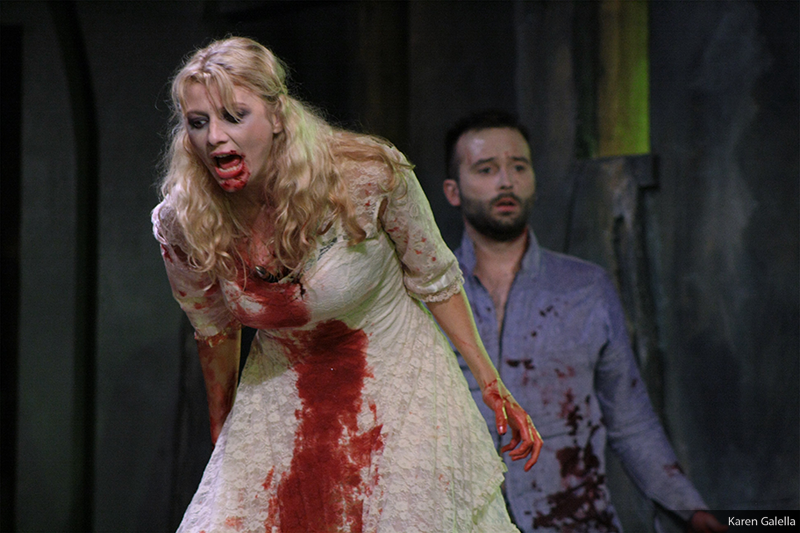 Melody Bates's play R&J&Z (Romeo & Juliet & Zombies) starts from where Shakespeare left off. Asking the question how would Romeo and Juliet fare in truly eternal love if they were the undead and at the center of a plague-like outbreak of zombies.  It might be unorthodox to go see R&J&Z  to see the reanimated corpse of Mercutio because 20 years ago you saw him in a piece of experimental theater (Distortion Taco) that blew your mind but such is my unusual theater journey. And wouldn't you know it Mercutio and company did not disappoint.  There are some solid laughs and gross-out moments here.

As in Shakespeare's version, Juliet (Bates) awakes to find Romeo (Matt Hurley) dead in the tomb with her. She tries to suck whatever poison she can from his lips. Still not dead she stabs herself and with such messy business spreads blood on Tybalt (Per Janson), Romeo, and Paris (Blaze Mancillas) also in the tomb with her.  But to her surprise this does not end in death but rebirth for all she touches with her rejuvenating blood. Everyone in the tomb awakes as zombies but still with control over their own brains. Others in town are not as lucky and are your traditional mindless zombie horde. The Apothecary (Rachel Benbow Murdy) who gave Romeo the zombifying-poison in the first place has been secretly experimenting with the undead and keeps zombie Mercutio (J. Stephen Brantley) under his control. The Apothecary sends Mercutio out to kill Juliet but one bite from her and Mercutio also regains his personality. Fighting the undead are two Buffy-like searchers (Margi Sharp Douglas, Caitlin Johnston) sworn to this sacred duty.  Friar Lawrence (Warren Jackson) has some ideas about what has transpired and thinks he knows who is behind all this.


Blood, guts, and gore ensue with a mix of serious pondering and giddy silliness. The play, performed all in verse, gets weighed down along the way with uneven tone issues and excess exposition but when it clicks it's delightful--as delightful as a rom-com dripping with blood can be. The Romeo and Juliet scenes are its strength and its levity.  The star-crossed lovers are our surrogates in all this madness and they're still the two crazy kids we've come to love from Shakespeare just trapped in a scenario they (and we) never envisioned.  Each time they were off-stage I longed for them to return.  Unfortunately when they were not around things got bogged down in subtext as text from the Apothecary and the searchers.  For a two hour show, I wished the play had gotten going a little quicker (it's 30 minutes of what we know of Shakespeare's finale at the start) and dialed up the zaniness throughout. I thought director Joan Jubett could have kept the energy up or made the more "serious" moments a little more campy.  As it stands it doesn't quite have enough gore and laughs to keep the splatter-gore aficionado engaged throughout and a little too much telling and not showing for the regular playgoer.  But there's a real exciting kernel of an idea here and the show has it's successful wacky and sweet moments.

Performances were mixed. But as I hoped J. Stephen Brantley lived up to my twenty years of pent up expectations. His drooling, hissing monster Mercutio moved with the structural integrity of a Frankenstein-like creature driven by blood and hunger. When he returns to his former self and regains his voice, he's a bit of a romantic fool. Embarrassed and self-effacing, overly affectionate but apologetically so.  Brantley manages all with authenticity and with his comedic delivery you might have wished he had entered the story sooner.   Bates makes Juliet strong and delicate even with a taste for flesh. She's convincing as a Shakespearean heroine, a blood hungry zombie, and a girl in love.  It's not an easy trio to pull off.  Hurley starts out a little too earnest and one note (I mean Shakespeare's Romeo can be annoying and is no less so here) but when given more comedic work he comes alive and starts to shine.