A Piece of Work: A Text of Hamlet Remixed

on August 19, 2017
Preserving performance is a challenge. How do you document multi-faceted work that involves sound, light, text, bodies, and music? Video may take images of it but rarely captures it. For Annie Dorsen’s algorithmic performance work, there’s an additional layer--including her computer partners in action. Recently published by Ugly Duckling Presse, Dorsen’s performance text for her 2013 Hamlet inspired show A Piece of Work tries to preserve some semblance of this unusual show, algorithms and all. 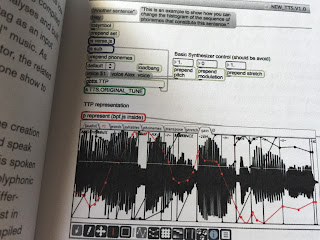 Algorithmic theater is where a text is run through algorithms using various rules created by the artist. A unique, different show is generated each time by the computer applying the rules. The computer, in essence, becomes a co-creator. Watching one of these shows you begin to think about labor, collaboration, and creation differently when the computer generates different performances every time.

Dorsen explains in the introduction of A Piece of Work how she developed the show and the rules she applied in utilizing the text of Hamlet. The text was fed through what is called a Markov chain--a primary algorithmic principle. The computer does not "learn" from each run. Each production is entirely new in that moment.

In an effort to give it coherence, Dorsen and her team also programmed in some semantic and theatrical rules. The computer was instructed to pull from specific parts of the play and not the text as a whole. So for instance one act uses the soliloquies only as its source material. Another act uses 4% of each scene in the play as it is written and then is cut off. They can program to have the computer choose complete sentences or stage directions. 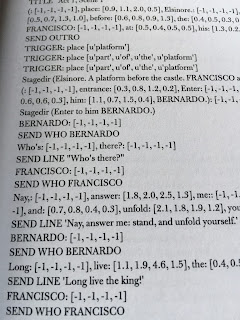 In addition, they found a way to program emotional weight into it. Using coding, they gave words emotional scores which fed into the lighting and music design. Lighting colors would receive different coding to connect to different emotions and so words would trigger those changes.

In this five act work, an actor was used only in Act 3 where the performer was fed their lines via an earpiece. Otherwise, Dorsen used computer-generated character voices to "perform" the text in the remaining four acts. The computer determined the lighting, sound, and music and generated projections of the text for the audience to see.

Reading the text you need some of this structural context to appreciate what the performance might have looked or felt like. Some of the explanations of the rules could have been a little more detailed but generally you get the idea of the “rules” imposed.

In one section, Dorsen provides two different examples of the same section of the show and how it was rendered differently by the computer on two different nights so you can appreciate the variation and nature of the changing performance. 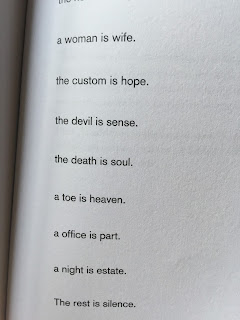 This may sound incredibly technical but the reality is that the one Dorsen show I've seen, Yesterday/Tomorrow,was anything but dull. In that piece there was a trio of singers who sang the song Yesterday and the computer found a way to incrementally, musically and linguistically, turn it bit by bit into the song Tomorrow. From that, Dorsen convinced me of the value, joy, and creativity in algorithmic theater.

Though I could not truly recreate A Piece of Work in my living room I found reciting the text out loud (rather than just reading it) gave me a feel for the structure and reconstruction of Shakespeare's poetry. The rise and fall of the verse somehow survives the algorithmic blender. There is a new meaning even if there is a faint echo of the rhythms of the original. Particularly the soliloquies section in Act 3, the movement of the language is halting and repetitive and yet the desperation of Hamlet remains present. Confusion, grief, and anguish bubble up through phrases such as:

A basic knowledge of the play allows you to appreciate the words floating on a blank page and still sense the underlying story of Hamlet.


Because it's so canonical (and because I had seen four productions of Hamlet this summer) reading A Piece of Work gave me the unusual pleasure of experiencing Hamlet from a totally new angle. Recognizable and yet surprising.  It makes new poetry out of old.

For the final act, the computer re-sequenced things on a letter by letter basis and then it was programmed to give 50 stage directions to end the show. As with the progression of the play, in that final act where tragedy after tragedy befalls character after character, in A Piece of Work language itself breaks down completely. But the re-ordered stage directions still manage to communicate a duel and a series of deaths in a finale.

Certainly no printed text could replace such a complicated production, especially one, that is by its very nature, changing every night. But the text does offer a new window on Hamlet (as I imagine the production itself did) and for those who missed the performance (like me) this is the next best thing.

A complimentary copy of the text was provided to me to review.
Annie Dorsen Hamlet Off-Off Broadway