March was the hardest month of the pandemic for me. Someone in my building was hospitalized with COVID-19 very early in the month. From the start, the fear of illness felt like it was at the threshold of my front door. I was le freaked out. I felt smothered being indoors and I was struggling to be around people when outside. Fear filled my days. Rational and irrational.
I thought it would help if I went outside every day for a little sunshine, but other people not keeping a distance was giving me agita. Over the course of the month, I went out less and less. With it, the feeling of my regular life drifted away from me and I wasn't sure how to deal with it. My life had gotten very small, very quickly.

A few days into quarantine I took a chance on watching a Korean series which sounded ridiculous: Crash Landing On You.  A friend from the UK tweeted about it and described it as thus: 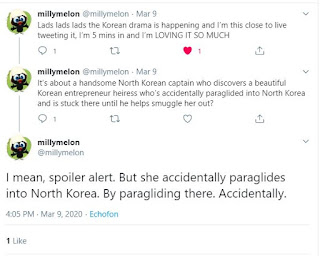 I had to see what she was talking about.
Yes, a wealthy, powerful woman Yoon Se-ri (Son Ye-Jin) finds herself lost in North Korea and needs the help of Captain Ri Jeong-Hyeok (Hyun Bin) to get her back home. I’m a sucker for a rom-com, but once I started watching there was something else going on in the show for me.
The bittersweet undertones, the colorful characters, the rich sense of place, the cross-cultural discovery, and the concept of Korean peninsular proximity and yet great distance between nations all seemed to be what I needed in this early stage of my indoor life.  It was an excuse to travel without leaving my sofa. It got me out of my head and my house.
I loved the gauzy yearning and long ardent stares. The comedy translated so easily (which is not the case with some English-language shows from foreign countries).
Quickly I was laughing and crying. It was so delightful that I only got 6 episodes in before I started re-watching the series from the start. Somehow 6 out of 16 episodes felt too close to the end. I could not cope with this show ending. I did not want these characters to leave me. No matter their fate, their absence was too much to take. The characters became a proxy for the real-life friends whose absence I had no choice but to accept.
Geography in NYC has so rarely been something any of us paid much attention to. But suddenly if your friends did not live in your immediate neighborhood or walking distance you were not going to see them for a long time. All my friends elsewhere in NYC were suddenly so far away. Not quite North Korea but out of reach.
While Yoon Se-ri meets and befriends a bevy of people in North Korea, she makes connections with people who she knows will eventually be impossible to see again. Her deepening friendships and romance are constantly tinged with a bittersweet reality of what was going to have to be a temporary connection. <sobs>
Day-by-day this show was what was sustaining me in March and getting me through the worst feelings of being locked-in. I would finish my work and rush to the sofa to start another episode. It was hard to keep it to one episode a night. I had to drag it out as long as I could.
****
A friend and I were talking about how we’ve gravitated towards craft hobbies from our youth during lockdown (her sewing, me crocheting). I’ve started to wonder how much of this Crash Landing heart-eyes romance obsession is also about reaching back to the past in another way.
Is this all reminiscent spiritually of my pre-internet, pre-teen years?  In those years, my best friend and I would get on the phone and together watch 21 Jump Street (classic). We would sit in silence watching the show until the commercials, when we’d start chatting again. The text messages I have been sending to friends about Crash Landing have some of that quality. Just squee and joy and reverie over the characters.

"He made her noodles BY HAND!" "Oh my god the bra shopping." "His dimples." "Please message me every time you watch an episode. I can't live with this all inside."

We've lost so much that made our lives rich and complex. Our comforts and joys are whittled down to the bare minimum these days. Other people have poured themselves in bread baking, puzzles, and board games. I found my way to Crash Landing.
I survived March thanks to Crash Landing On You, the good people of FreshDirect, and the makers of bleach wipes.
K-Drama Pandemic