My TV viewing in May was all over the map. This is probably a sign I'm not doing as well as I think I am doing. My brain pinging from place to place as I tell myself it's all quite fine.

On the surface, I’ve eased into an indoor life maybe too easily. I don't mind being alone. I have a routine with groceries and supplies. By May, I had sorted out a comfortable work-from-home set-up. I'm exercising more than I ever have before. I'm feeding myself--though I tire of my limited skills in the kitchen. Food is complicated for me and I won't get into that here.

I poured all my May anxiety into slipper shopping. My feet had been killing me from going barefoot or wearing cloth Japanese slippers. I found a nice pair of boiled wool slippers from Austria.

Without any additional personal K-drama recommendations to go on, I kind of just stumbled my way into some other titles in May. I had some hits and some misses.

I was in the mood for a police procedural, so I watched Stranger. It is a show about political corruption where a prosecutor (Seung-woo Cho) (who has had brain surgery which largely eliminates his ability to emote) ends up running a high-stakes legal-political investigation. He ends up paired with a police officer (Doona Bae) who doodles and draws and isn’t quite a fit in her police station. Oddballs unite.

I loved this quirktastic duo (and the actors playing them), but the other characters were not as robust. A female prosecutor in the show makes some dumb choices which did not jibe with her education, background, and demeanor otherwise. I was not a fan of whatever the show was trying to do with her. Sometimes she was flirting with the prosecutor, sometimes she was just screaming.

On the positive side, it did introduce me to the processes of the Korean justice system (hashtag law nerd) and where/how political corruption can intersect with class issues. Also I learned about pojangmacha (tent bars). It was not a waste of time.

From there I oscillated back to romance, and tried another show staring Yei-jin Son from Crash Landing. It turned out Something in the Rain was a bad choice. The writing and production elements were terrible. There was no B romance plot, but, in fact, a very unsettling sexual harassment subplot. 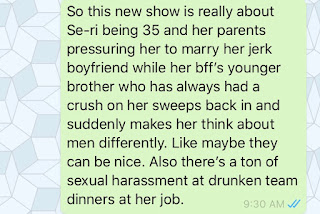 While it provided some insight into contemporary office harassment, it felt weirdly incongruous with the rest of the story. Also the stakes of the romance were odd. The barriers were certainly not as dramatic as CLOY or Mr. Sunshine. The drama from the romance ended up with nowhere to go.

Worse, someone decided the song that should be repeated throughout the show at wholly inappropriate moments was "Stand By Your Man." I actually had to start muting every time they played it. With a poor sound mix, it nearly drowned out the dialogue at times. But also...what are you even saying with that song and sexual harassment.

There was also an element of co-dependence to the romance I did not like. There were far too many montages and very little character development. It's like they stretched a 6-episode idea into 16.

There was one side character I was interested in, played by the likable Min-Kyung Joo. I wondered if it was a coded lesbian character--in fact I've thought that a couple of times in different shows. I have not seen overt queerness in any show. Go Ae-sin cross-dresses a lot in Mr. Sunshine as a tool of liberation and that's the most "queering" I've noticed.

I pushed through Something in the Rain to justify the time already spent with it. But I will admit to fast-forwarding a lot.

Save yourself and do not go down this path. While Yie-jin Son is great, I think the show isn’t quite sure what it is saying about women (or if it does know, I didn’t know).

After that debacle, I was a little worried I was floundering in K-drama land. But I just instinctively gravitated towards The K2, an action romance involving a bodyguard Kim Je-Ha (Chang-Wook Ji) who falls for his charge Go Anna (Yoon-ah Im), while he works together with a manipulative and steely politician's wife, Choi Yoo Jin (Yun-ah Song), who is trying to become the First Lady of Korea. BINGO.

It was so fucking fun and also ridiculous. There is a comedic naked action scene in a shower. I shouted at the TV “THIS IS GIVING ME LIFE,” a phrase I have never used before And I exclaimed it with sincerity. 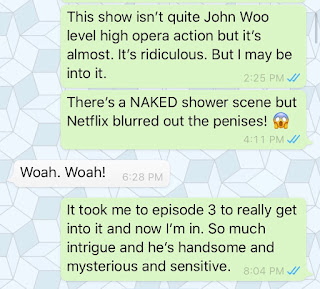 It turns out I like a kickass hero who also is a bit of a doofus when it comes to personal interaction. He's unrelentingly cool, until he's a sweaty-handed mess at love. He's loyal and kind to old people, poor people, and the invisible. He's like the uber empath bodyguard who also can kick your butt.

There are a lot of devious characters in the show and he ends up forging alliances with some. But even in that, he sees when one character has been betrayed and he figures out a way to come to her rescue. The moment is le gorgeous.

However, Anna, his love interest, is not the strongest female character. Very damsel-in-distress making poor choices, a lot, for a while. Even if they try to justify this with her past trauma, it bummed me out. Sigh.

There were some nice supporting characters and surprisingly moments of comedy between action scenes and longing.  It's gets a little to A LOT over-the-top in moments a la shows like 24 or Alias, but it remained a fun escape.  A good choice to end May with.