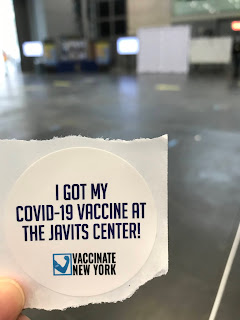 It’s been a fucking year. And I don’t know what I am supposed to tell this pandemic diary…except I didn’t really think when this started, we’d get here. I started counting the days I had not been away from my house at the start of the pandemic truly thinking it would be about 3-months.  That was my first week thought.

And now here we are…rounding the start of March again and all the anniversaries of this year of isolation are just awful. Somehow though, on the last weekend of February, I got my first vaccine shot.

I am panicked at both continuing to stay in my house all the time and venturing out further as the agoraphobia has set in. So yeah…a year trapped indoors will fuck with your brain.

I also have managed to watch about 50 K-dramas in a year, so let's talk about my February shows.

Thank god this show came into my life this month. I know a lot people were hitting a winter pandemic wall and I’d like to think my prescription to keep it away was Park Seo-joon smiling and this drama overflowing with dramatic tension, friendships, and romance.

This period piece about a school for young warriors was stuffed with rambunctious boy energy and bunch of K-pop stars and yet manages to be a playful teen comedy as well as a serious drama.

It starts out as the Muppet babies of Silla, where these rowdy boys end up training together as soldiers and must figure out how to lead the nation. Concepts of what leadership is and what could it be get thrown around and these young men must grow-up and figure out what makes sense for themselves.

Add in a lively and independent female lead, handsome righteous men, and several gripping HOW-WILL-THEY-GET-OUT-OF-THIS jams and I was sold.

Dog-bird (Park Seo-joon) is a wild youth who has grown up without parents alongside another abandoned boy. His bff Mak-moo dreams of reuniting with his family. But through a cruel twist of fate a visit to the capital ends that dream. Dog-bird then ends up secretly taking the place of his friend at the behest of the boy’s father Lord Kim Ahn-ji (Choi Won-young) who is a doctor ministering to the poor. Dog-bird must also keep this secret from his friend’s sister Kim Ah-ro (Go Ara) who is struggling to accept this young man is her long-lost brother.

Dog-bird has to protect Ah-ro from the Queen Dowager who has a complicated romantic past with Lord Kim Ahn-ji and is always trying to do his family harm. It was impressive that the Queen manages to pull off the “I want to destroy your life again, but I also still want to sleep with you” vibe with Lord Kim. Fun, to be sure

The Queen Dowager has been ruling place of her son King Jin-heung (Hyungsik).  There were always threats against her young son’s life so she’s kept him hidden and ruled instead. But there is growing tension between them about whether she will ever cede the throne to him and whether he is ready to step up and face these challenges.

The Queen Dowager creates the Hwarang in an attempt to bring together the sons of the powerful nobles as a tool she can control.  But Jin-heung, against her orders, joins. He and Dog-bird have a rivalry that starts to grow into a friendship but they both have feelings for Ah-ro.  All I wanted was for Dog-Bird and the once and future King to become friendz.

Ah-ro ends up working at the school tending to the wounds of the students. She herself is confused about growing feelings she has for her “brother” who she has not seen since she was a child and the suspicions she has about his identity.  Since the audience well knows that Dog-bird is not Ah-ro’s brother the “incest” angle tends to fall to the wayside.

There is a sadness to both of them and their circumstances, and the truth cannot come out for reasons, and so they both end up having to suffer in silence about their feelings for a while. Sorry to them, dramatic noms for us.

Go Ara had such great comedic timing and her scrunchy face panic around the young King just added to the fun.

Naturally, with an issue about succession, there’s a fight over power and control for the throne, so the show also must deal with a powerful minister trying to steal the throne from the Queen Dowager and the sons of the elite who were often rivals now having to work together as warriors.

Among the other students is the son of a nobleman, Soo Ho (Minho) who is lovingly obsessed with the Queen Dowager and would do anything for her. Thrown into the mix is Taehyung from BTS who plays a warrior who is too “soft” and must be toughened up according to his grandfather. He’s also the loveable school gossip and everyone’s precious little brother.

And this show has so much unrequited love it is overflowing.  Everyone has someone they are giving longing looks to.  A+ on the swoon factor.

Then for no reason at all they basically stage a mini-musical number in the middle of the show. These lovable goofballs--cure for wintertime blues.

As a palace intrigue goes, this one is unique. It’s not just your basic murder of monarchs. It has this added layer of tension between mother and son and what exactly each of them is fighting for. Her regency protects him but it denies him a mother and any growth as leader. Jin Heung has a touch of the constipated for action Hamlet going on as well.

It would have been nice if the boys had kissed at some point.  You cannot have everything, but this show offers more than it's share of pleasures.

Sometimes you come home to find your boyfriend murdered in your living room and then you, Eun Bong-hee (Nam Ji-hyun), get framed for his murder. And while this could get you down, you somehow get off on a technicality and then work with the prosecutor, Noh Ji-wook (Ji Chang-wook), who prosecuted you to figure out who actually was the murderer. And maybe you also fall in love with the prosecutor. It happens.

This oddly light comedy is also a murder mystery and an awkward workplace romance. Involving two oddballs, they are fated to be in each other’s lives it just takes them a while to work through all the stuff that gets them there.

I wasn’t so sure about this show from the first episode but it grew on me.  Ji Chang-wook and Nam Ji-hyun make for a messed-up couple who seem wrong for each other until it becomes apparent, they are right. She’s independent, outspoken, and often a mess. He’s folded in on himself since he came home to find his fiancée with his best friend. But he secretly worries about her and wants to do what he can to help her.

Naturally the best friend and fiancée reappear in his life again and become part of the dynamic.

Unfortunately, the show has 40 half-hour episodes. It was so long I started to forget that Eun Bong-hee had been wrongly accused of murder in the first place. The comedy falls away and the show starts to collect a lot more stalkers and murderers. A bit tedious.

The set design made little sense at times and I also wanted to fire the lighting designer who turned every night scene into harsh daylight and blasted the shit out of our eyeballs with backlighting on a kiss. A lighter touch on design and direction all around would have been helpful.

But I did appreciate Eun Bong-hee having a flashback over a certain kiss with Noh Ji-wook. I mean same babe.

I absolutely hated the shrill first episode, but with the right amount of fast-forwarding it has an enduring charm--the sensitive puppy dog sweetness of a very young Park Seo-joon as a young man who has suffered tragedy who unexpectedly finds himself drawn to this older woman.

Unfortunately, the writing, plot, and rest of the show offered little else.  I truly did not care about any of the side plots and other love stories. Also, the baby talk with the best friend and her husband is a lot.

While I personally hate the “women will cease to exist after 40” narrative, the show wants to have its cake and eat it too.  It spends a lot of time flogging that particular fear and anxiety in the Witch of the title, then tries to escape it.

I would just like more love stories about women over 40 without anyone giving a shit about their age, please.

The main problem with this remake of the American series of the same name was...it was too American. There was so much plot to cycle through that there was less time devoted to developing the characters and their relationships. I want to see more shows with Hyungsik. He's got some interesting range and I enjoyed him in the rap scene here in particular. But the romance was lacking any chemistry and the female characters were deeply underwritten.