Pandemic Diary July 2021: Sad Stuff and So Much Seo In-guk


Hello. I am a full-fledged BTS fan now and my bias is Suga. It came fast and furious. I’m sad I did not discover his existence sooner. But I am here now.
So, I’ve been spending a lot of time watching BTS's Bon Voyage and Run BTS and less time with dramas this month.

Also, the dramas were just not serving up what I was looking for. I was desperate for some good rom-coms and there were just so many dark and murdery shows. I kept switching off the shows I started. Nothing fit my mood exactly right. But I did watch a handful of dramas so here's my report on the month of July.

***************************
Youth of May
Setting a show in Gwangju in May 1980 means only one thing is coming—the Gwangju Uprising and the massacre of civilians by the Korean military. Youth of May is a 12-episode dramatic, romance set against the backdrop of this event. Because tragedy is inevitable it’s quite a painful and necessary watch, but the writing does not always serve the important subject matter well.

Hwang Hee-tae (Lee Do-hyun) is a medical student who returns to Gwangju under vague circumstances involving an injured patient. He is set-up by his powerful father, Hwang Gi-nam, on a blind date with Lee Soo-ryeon (Keum Sae-rok). Soo-ryeon’s father runs a pharmaceutical business and sees an advantage in these politically turbulent times to ally himself with Hwang Gi-nam. Soo-ryeon is part of the student protest movement. She wants nothing to do with this date or potential marriage and asks her best friend, Kim Myeong-hee (Go Min-si), to go in her place. Myeong-hee is a nurse from a poor family who needs money to study abroad and agrees to the date so Soo-ryeon will help her pay for her plane ticket. But Myeong-hee and Hee-tae are drawn to each other complicating matters even further.
I wanted so much to love this show. The characters are well-drawn, Lee Do-hyun, in particular, just brings so much color to Hee-tae and his quirky character. Myeong-hee’s personal fight for her career and an independent future in the face of some issues related to her father was really interesting. But there are some giant plot holes, odd choices that force the characters into ridiculous situations, and the storylines are not woven as carefully as I had hoped for.
In some ways, the 12-episodes force things to move faster and with less care than a 16-show arc. But at the same time, I’m not sure my heart could have taken 16-episodes of waiting for tragedy to come to these characters. 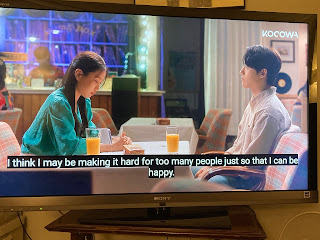 The show focuses on themes of sacrifice, power, control, courage, and elusive happiness. The characters have had so many setbacks in their life. Hee-tae treats his past tragedies with a kind of gallows humor. He has to laugh at his circumstances or he will fall apart. Myeong-hee is so afraid to feel anything because she might feel everything. Neither are sure they deserve happiness and it’s what makes them so sweetly perfect for each other. A romance between them is a disaster and they know it, but they recklessly pursue it anyway.

Here, Lee Do-hyun shows more of his range than in Sweet Home (where he and Go Min-si played siblings). He is open-hearted and romantic, with a nervous panicked affection. His lanky, goofy sense of humor is pitted against a steely determination. But his bravery can slip away when his heart breaks and with quivering lips, shaky hands, and pained grimaces he becomes instantly fragile. He has this lopsided smile that starts to grow wide on one side of his mouth, only to have his lips retract it and regret it when he's not sure he is allowed to be this happy.
I don’t regret watching it, but the version of this drama that I think they wanted to make unfortunately exceeds the one they did make.
***************************
Doom at Your Service
For zero percent of this show did I comprehend this battle of wills between a woman dying and the mysterious personification of “Doom.” I never understood the rules of engagement, the concept of Doom, the God-like entity Doom worked with, or what on god’s green earth was happening.

Tak Dong-kyung (Park Bo-young) finds out she has a brain tumor and only has three months to live. She drunkenly wishes for the world to be doomed and literal Doom (Seo In-guk) decides to intercede and grant her wish. He can take away her pain and let her live out her final three months comfortably and then the world will end or he will destroy the thing she loves the most.

They hate each other, pester each other, and then somehow get so intertwined love comes into the picture and yet the deal they have made keeps going. Is Doom falling in love or seeking his own destruction from his miserable existence? Or something else? Who knows.

I was really mad that my personal fave Kang Tae-oh (who plays one of the love-triangle-brothers) takes forever to come into the storyline and he is super sad for most of it. MORE KANG TAE-OH IN DRAMAS AND ALSO LET HIM BE HAPPY.

There’s such a heaviness to the whole show including the second-string romance. Why? It could be a little lighter or even fun? No one in that love triangle is dying or trying to destroy humanity. Why so bummed out folks? Maybe the big takeaway is life is terrible but if you fall in love with Doom it gets better?

If nothing else you can enjoy Seo In-guk being smug, hot and full of confusing rage-love. He does all those things very well.

Louis (Seo In-guk ) is an heir to conglomerate, lonely, and fills his life with shopping and nothing else. As his grandmother is about to announce his succession in the company, he gets into an accident and loses his memory. He runs into Ko Bok-shil (Nam Ji-hyun) who is searching the big city for her little brother who has run away. She’s naïve and easily conned, but she thinks Louis has the answers to her brother’s mystery locked somewhere into his memory. She takes him in, feeds and clothes him. She is barely able to support herself and yet she adopts this dumb puppy of a man who costs her so much money and aggravation. But he’s hot. And sweet. And everything he does is unwitting. And she has a heart of gold. I would not have the patience she does no matter what he looked like. But he is very hot.

Seo In-guk plays a precious teenager who is pining after his best girl friend for years while she is oblivious.

While some of the “vintage” 90s stuff was amusing, I could not get into the characters nor this atrocious romance that I found offensive. Sorry to everyone who loves this show, this was not one for me.
BTS K-Drama Pandemic