on December 12, 2011
Haunted Child is a riveting play by Joe Penhall about feeling lost, resenting the trappings of adulthood, and wanting to connect with what makes you happy.  It is currently playing at the Royal Court Theatre in London.  I missed visiting the Royal Court back in October during my two week London theater extravaganza and I was anxious to check it out.  As a theater wholly focused on new works and the theater that brought Rock 'n' Roll and Jerusalem to life, it seemed like an important theater to visit. 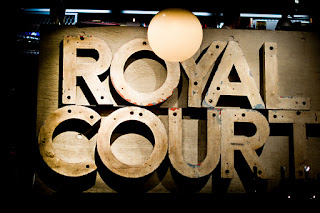 I was glad that last minute tickets to Haunted Child were available and I ended up in the front row of a packed house.  The show stars Sophie Okonedo as Julie and Ben Daniels as Douglas; they are a couple whose union is suddenly thrown into chaos by Douglas's disappearance and subsequent reappearance.

Douglas, it turns out, has joined a group that discusses esoteric philosophy and through this spiritual reawakening has come under the spell of a spiritual leader.  The organization wants him to shed off worldly things like sex, his family, his front teeth and his home and commit to them fully.  If he wants to see the world changed, he must first change himself.

The play presents this unseen, unnamed group as quite cult-like but there are moments of Douglas's struggle that show what he is seeking out of this life quest might be actually, at times, quite reasonable.  He wants to reconnect to the person he once was: his younger self when he took more chances and was more open to the world.

What he wants from his wife and son is less clear.  He disappears without explanation and when he turns back up he hides in the attic for a few days.  While hiding there his son hears unexplained noises and worries he's hearing ghosts.  The disruption of Douglas's quest wreaks havoc upon his relationships with his wife and son.  He shares far too much about his new lifestyle with his young son who is impressionable (and struggling with issues of his own) and desperate for his father's presence.  He cannot articulate to his wife what life he wants to keep--the one with the spiritual group or the one with her.  The play is mainly focused on this struggle and Douglas's desire not to have to remain an adult forced into making choices he does not want to make.

I was intrigued by the themes explored and enjoyed the hyper-dramatic circumstances which are the catalyst for the story.  It is not really about cults.  But it is about what people are searching for in their lives.  It presents an interesting scenario of how a group offering an empirical and "esoteric philosophy" can be appealing when adulthood has delivered disappointment, loss, and struggle.

Ben Daniels (who I have not seen on stage before--but he was in Les Liaisons Dangereuses at the Roundabout) throws himself into the role with every fiber of his being.  He makes his character sympathetic when Douglas is not really sympathetic at all.  Daniels finds moments to bring the audience close to his point of view.  As a particularly cynical theater-goer, it is a hard task to do when you are basically trying to espouse the tenets of a cult.

Sophie Okonedo has a harder job.  Her role is often foil to Douglas and constant nag.  She ends up spending most of the play parenting her son and her husband.  It's a thankless task.  She has moments where she is able to step out of the role of wife and mother and we see a glimpse of who Julie was...but these are fleeting moments.  I think that is really the point of her role.  She is there to remind us of what adult responsibilities are, how marriage and children change you, and how you can easily lose sight of who you once were.  But I wished there were more moments.  I understood the purpose of the role but struggled to empathize with her character.

The son, Thomas, is played by two different boys.  I missed which one was on the boards the day I saw it and frankly he was not very good.

I could not help but compare this show to Maple and Vine.  They are two very different plays but both seem focused on what people want out of their lives that they are not getting and the extreme lengths some will go to try and heal themselves.  Where Maple and Vine took an almost satiric, dark comedy road, Haunted Child is direct, unflinching and unquestionably a straight up drama. 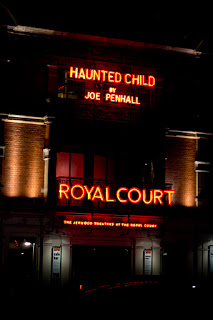 It's a nice little production.  I would not expect it to transfer to New York but it is a compelling play and worth seeing if you have the opportunity.  I would definitely want to see Ben Daniels and Sophie Okonedo on stage again.
Ben Daniels Bitter Review Cult Leader Cults Jeremy Herrin Jerusalem Joe Penhall London Maple and Vine Royal Court Sophie Okonedo